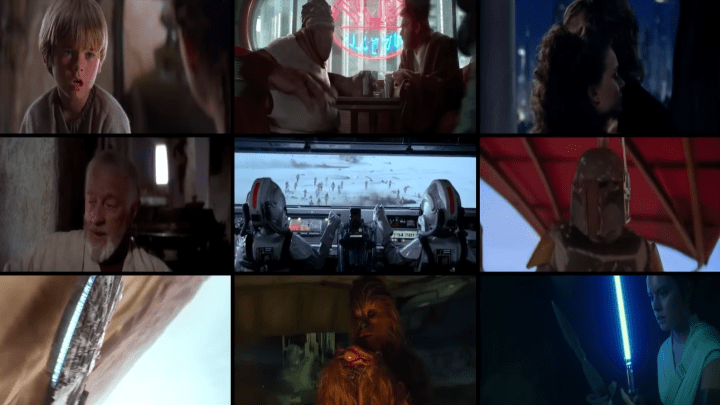 Thank you Internet, for once again delivering something new and distracting for us. Watch this YouTube video of a nine screen split of Star Wars episodes I – IX. It’s crazy!

UPDATE: Well, you actually can’t watch this now. Disney managed to find it overnight and yanked it, stating copyright concerns. Which is their right: Star Wars is their intellectual property and, as Boba Fett once said, “It’s worth a lot to [them].” They want to make money off their movies. But the idea is still a unique one.

What other franchises could benefit from this kind of treatment? James Bond? No, that would be overkill to the max. I think a nine-screen split is as much as anyone can realistically handle. It seems six or nine films would be most suitable for this kind of wacky/messy/exuberant rewatch. (BTW, all links go to our reviews.)


We suggest The Fast & The Furious, if you add in Hobbs & Shaw to make nine (eventually there will be nine…just not this year, damn).

Definitely all Harry Potter and one Fantastic Beasts film.

For sure the Lord of the Rings, although the three Hobbit movies would quickly show their inferiority, viewed this way. Although, that’s also where the Classic Star Wars vs the Prequels comes up short. Still, LotR would be a fun 6-movie mashup and should still take as long as the nine ‘main saga’ films of Star Wars. So it’s got that going for it.

Jaws might work. How many Jaws films do we have now? And there are lots of horror series to benefit from split screen goodness. (Chucky? Saw? Halloween? Unlike RunPee Sis, I’m not up on the horror shared universe thing.)

Playing with ideas for the Marvel Cinematic Universe as a split screen experience:

Anyone want to make these split screen extravaganzas and share your You Tube link for our RunPee shout out?

Which movie series would you choose to watch all at once? And why would you want to? No, really, we want to know your thoughts — will there be patterns in the static? 😉 (Ten points to your House if you get that reference.)

How to Host a Movie Night in Quarantine