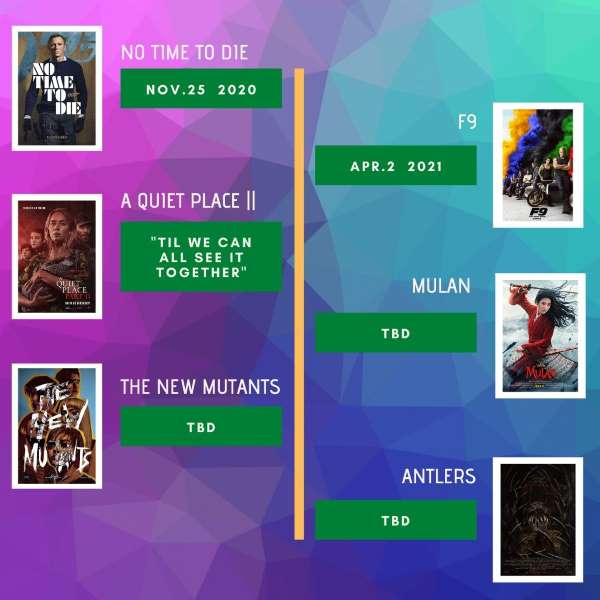 Many movies have already changed their release dates, with many more to come. Some movies have changed release dates, and may do so again; some have just  been postponed indefinitely until there’s some clarity; others are going straight to streaming. I’ll work hard to keep this list current as things change.

Assume that everything releasing before June is pushed back. My suggestion is to subscribe to our weekly newsletter — released every Wednesday. I’ll have information about the new release dates as they are announced.

No Time To Die — the most unintended ironic movie title ever — has been pushed back to November 25, 2020

A Quiet Place doesn’t currently have a release date. Write/director John Krasinski stated that it won’t be released ’til we can all see it together.

Mulan has been pushed back and doesn’t currently have a release date.

The New Mutants just can’t catch a break. It was originally scheduled for a release in April of 2018, but was delayed  until the following February to avoid clashing with Deadpool 2. But that meant it would clash with Dark Phoenix — remember that stink fest? — so it was delayed again until August 2019. But then Disney acquired Fox Movies, and it was delayed again until April 2020. And now the global Coronavirus pandemic has once again shifted the release date, until who knows when.

Antlers, starring Keri Russell (The Americans), has been pushed back and doesn’t currently have a release date.

Universal Studios announced they will bring The Invisible Man, The Hunt, and Emma to Amazon, Apple Streaming, and Sky, for rentals at $19.99/film (with a 48 hour viewing window).

DreamWorks Animation’s Trolls World Tour will also stream on demand, starting on April 10, the day it was originally scheduled for theater release.

Marvel’s Black Widow is currently scheduled for release on April 24, 2020, but clearly that’s not going to happen, because both AMC Theaters and Regal Cinemas announced they are closing all theaters in North America.

Update: Disney just announced Black Widow, due to release on May 1st, will be rescheduled at a later date.

The Personal History of David Copperfield will be delayed.

The Woman in the Window: delayed.

Then there’s the matter of TV and movie productions that have been halted. To make a long story short: assume that production of “insert your favorite movie/TV show here” has been halted or will be very soon. But, if you want the specifics, then read on.

All Amazon original series, such as Lord of the Rings (gasp), have been halted indefinitely.

You know what; it’s just redundant and too damn depressing to go on listing everything halted indefinitely. I’ll update things here — or in other posts — when there’s news something is back in production and released dates are announced.

Or, as the writers strike taught us back in 2007, some productions will be permanently canceled — and we’ll never get to see the ending. 🙁

https://runpee.com/natalia-alianovna-romanoff-black-widow-original-avenger-spoilers/What TV shows/movies are you going to miss the most?