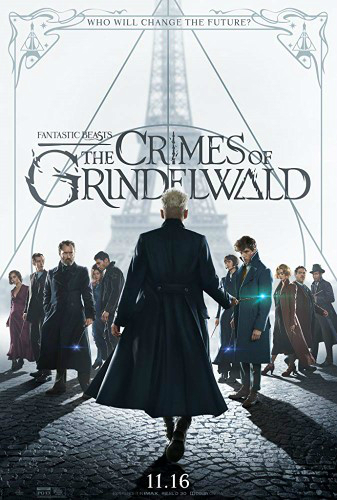 I don’t know what happened with this movie. It looked great from the trailers, and seemed like the story would make sense. The film itself, though, was a big beautiful mess. I’m not even sure what I saw.

I’m essentially a Harry Potter expert. I’ve read the books dozens of times, seen the movies even more, visited The Wizarding World of Harry Potter, and traveled to places filmed on location in both London and Scotland. I belong to a Harry Potter Meetup group, and have different wizard outfits, cobbled together over the years. I’ve made wands. Blah blah blah. All this to make it clear when I say I don’t understand Fantastic Beasts: The Crimes of Grindelwald. It’s a painful feeling.


It’s not even just me. I went with a fellow wizard friend, and he was disappointed and lost too. After the film, we tried to figure out what the movie was about, why the characters did the things they did, and were both just puzzled.

I saw the movie in IMAX at a select early screening with reserved tickets in a packed theater. Everyone there was a big HP fan, ready to have an exciting time. The audience started out applauding and cheering when different things occurred onscreen, like seeing Dumbledore, during the Hogwarts scene, when different creatures showed up, and when certain early secrets were revealed. However, as the movie wore on, the audience got more and more quiet. By the end, you could hear a pin drop. There was no final applause, which spoke volumes in its silence. People filed out with no fanfare or excitement. Basically, JK Rowling’s biggest fanbase seemed alienated.

I’ll probably see this a few more times in the theater — and it really is a pretty piece of work. I hope to figure out what the plot was about and why the characters did the things they did. I’m positive I’ll have better things to say about this film then. But in the meantime, I’ll say this: if I couldn’t follow the weird, convoluted, and very messy narrative told here, I doubt the casual fan will know what to make of it.

UPDATED OPINION: I saw this a second time and have a somewhat different review and grade for it in mind. I ‘m thinking a solid B now. My first experience was spent taking an intense amount of notes for RunPee and I missed a lot of what transpired. This is the kind of film you really can’t be distracted for. (Don’t make Peetimes kids, if you like movies!) I enjoyed my second viewing, but still stand by my original take — this sequel is problematic.

About The Peetimes: I attended a premier showing before the film officially opened. (I had to drink my hoarded Felix Felicis Potion to get this ticket.) While this is great news for RunPee fans, I will admit this was the hardest movie ever for me to get Peetimes. The film moves at a breakneck pace, with too many characters — many of whom were brand new and didn’t make any sense in the film. I added 2 Peetimes, in any case. The 1st is better, at 39 minutes in. The 2nd, at 1:16 will also serve. Neither of these scenes have any interesting action or fantastic beasts.

There are no extra scenes during, or after, the end credits of Fantastic Beasts: The Crimes of Grindelwald. (What we mean by Anything Extra.)

Movie Review: Fantastic Beasts and Where to Find Them