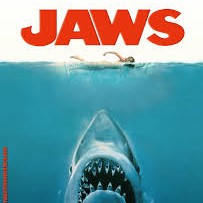 This movie still blows me away (not unlike the way a certain 25-foot Great White got blown) and I am super surprised. I knew it was good, but I didn’t remember it being THIS good. Like A+ level good. Steven Spielberg, while young, was already on his game.

It’s hard to hold the title of First Ever Blockbuster. And it’s harder even to look back since 1975 and agree that such an “old” film holds up to our current movie-going standards.

Remember, suspense-horror-action fans, it’s what you don’t see that’s the best kind of scare. Alien did it. Recently the very good A Quiet Place did this perfectly.


This review is going to have some spoilers, but since it’s been a while since the 70s, even people who missed Jaws the first time pretty much knows most of the plot (via pop culture osmosis).

The gore is surprisingly low key. There are two distinct grisly moments, and one of those is a jump scare. (That would be the one-eyed human head under the boat). And the only real icky scene is the real early one, where the naked girl’s remains are a bloody lump chewed on by a seething mass of crabs. It’s a quick thing, and you get more visceral punch from the random policeman who found her: he’s so squicked out he can ‘t watch, stand, or even be near the remains. You can almost smell it yourself.

The less you see of ol’ Bruce (Jaws’ real-life mechanical contraption) as he swims by or attacks, the better he looks. He’s got one or two raggedly bad side shots that really look awful (like when it’s on the boat, attacking Quint). Since Spielberg knew how bad his rubber shark looked, the crew kept it mostly underwater or head on, where we see only the big bloody mouth coming at the screen.

But. Then. The film really lucked out. Now we’re talking about the human actors – the big three. It works, and works fabulously. You know who they are. These are three very different characters, who come together and make you sit forward, avidly watching each moment build, smiling as they compare scars, then shivering in suspense as the story plays upon what came before. When the stricnine laced needle falls useless to the ocean floor, and the shark cage is in tatters, you’d do just what Hooper did — lie still under some flotsam and ride it out. Recall that the shark responds to prey-like panicky ‘fear’ movement.

Back on what’s left of the ship “Orca” (a great in-joke), Brody has one trick left, and isn’t looking like he’s going to survive this. However, the magic of subtle foreshadowing saves the day in a way that simply makes sense. It’s not a last minute Hail Mary – this has been baked in from early on, if you paid attention. The resolution is incredibly satisfying.

The fine acting of characters Brody, Quint, and Hooper elevate what could have been just another sensational summer disaster film into the stratosphere of real greatness.

And you know what else? THIS MOVIE IS INCREDIBLY FUNNY! I don’t think childhood “me” thought it was funny (I thought it was scary, even though the iconic Musical Shark Cue gave me most of those shivers).

But in this viewing, if I wasn’t gripped by a scene, I was laughing. And sometimes I was gripped AND laughing. This is frakking good storytelling.

The ending is so completely satisfying that you walk out with a big smile. I sat through the entire end credits, just to see Brody and Hooper make it, swimming on those barrels, back safely to shore. Then I could breathe again, and turn the laptop off. I haven’t felt so excited and satisfied by a monster action movie since Pitch Black or Aliens.

Something really fun: there’s a heat wave going on in So Cal, and I’ve been swimming in the pool daily. To the point where I wan’t going to dry out for movie watching…and yeah, I swam and paddled through my entire Jaws rewatch, laptop on the edge of the pool. This wasn’t planned. By the time I realized it, I was glad it was a pool, and not, you now, the ocean. (Although I love the ocean and no fraking fish is going to keep me out of it.) I just thought it was an interesting juxtaposition.

Did I bother to watch the sequels?  Good question. In a word: No.

Want to hear some crazy stats from the Jaws franchise? Rotten Tomatoes gives 1975 Jaws a coveted 97% score. For a film in an era of public smoking and casually sexist behaviors, that’s pretty awesome. For the sequels, the critic scores drop down FAST:

Jaws 2 – 57% (Meaning more than half of the reviews think it’s worth a shot — like a B- or C+) Click the link to read my IMO perspective review.

Jaw 4: The Revenge – 0% GOOSE EGG. It’s in fine company with several John Travolta movies (see even recently: Gotti gets the Goose). But the ZERO is way more than enough to sink the shark and his brethren for decades. Only weird franchises like Sharknado returned to this well, and as far as I know (I haven’t seen them), they are mostly a joke, like Snakes On A Plane.

And now….we have The Meg: all about an ancient, titanic sea shark the size of a cruise ship. We’re covering the science of Megalodon, the Mosasaurus, and the Great White on RunPee.com for your geeky enjoyment! (See below.)

About the Peetimes:  “The Meg” inspired us (Dan, Jill, and RunPee Mom) to do a rewatch of the classic JAWS and add Peetimes for it. (Just for fun.) We even recorded a podcast of our discussion about which Peetimes we would select. To sum: With a perfectly made film like this, finding Peetimes was easy and a joy. We always maintain that a well made film has both times of excitement, and times to recover. The movie builds on these solid principles.