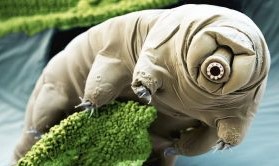 When leaving the theater my overall feeling was that I liked the movie — I gave it an 8.8/10 in the RunPee User Poll — but the more I think about it, the less I like it.

What I liked
The movie had plenty of funny moments and the action was decent. Actually, the action had most of the humor. And the father-daughter relationship scenes are heartwarming. The relationship dynamics between Scott, Hope, and Dr. Pym works really well. There’s conflict and regret, along with trust and support. The creators did a great job in that department and should have expanded on it.

The quantum realm stuff was pretty cool. I love that they included a scene with tardigrades. (Tiny animals in the cellular world.)


It was also a nice touch how the quantum probe they built got smaller in quantum jumps. Meaning, it didn’t get gradually smaller, it got smaller in discrete steps:  quantum.

(There’s a common misconception that quantum equals small. That’s not necessarily true. If you could travel in quantum jumps it would mean you would go from one place to another without traversing the space in between. That quantum jump could be a micrometer or kilometer.)

What I don’t like
I think the problem is, overall the MCU movies have done a great job building a believable unbelievable universe. What I mean is, we accept the existence of Infinity Stones, and that all of them united in a gauntlet can give the wearer unfathomable power at the snap of their fingers. Most of the technology is fantastical, but we buy it because it works in the story. However, in Ant-Man and the Wasp there are a lot of inconsistencies I find annoying the more I think about them.

For instance: when Scott is gigantic we find out he has trouble breathing. He says at one point, “The air feels chunky,” and then passes out. That’s a great limitation on the technology. I can totally accept that when he’s big he has difficulty absorbing normal sized oxygen atoms when he breathes. It’s a nice nod to the realism of the physics/biology involved. But then they totally ignore that principle when the ants are enlarged. It’s like the creators want us to think that Scott has a limit, but it doesn’t apply to the ants. I’m totally okay with breaking the laws of physics/biology to create a story. But once a limit is introduced, the story should stay consistent to it. That’s just a pet peeve of mine.

By the way, if you’re interested in the physics/biology of animal sizes I highly recommend these videos by Kurzgesagt. (If you’re unfamiliar with Kurzgesagt, then you may thank me later for introducing you to them.)

What Happens If We Throw an Elephant From a Skyscraper? Life & Size 1

And that’s not even the worst part. My biggest gripe of the movie is the Ghost sub-plot that just fell way short of Marvel’s standards. I hate to say it, but the acting by Hannah John-Kamen in some of the scenes was the worst acting in any Marvel movie to date. I can’t solely blame the actress. I think the directing had a lot to do with it.

Besides the bad acting, the Ghost sub-plot felt like a forced drama to make the plot more difficult than it needed to be. And if that wasn’t enough, we get the technology arms dealer Sonny that convoluted the drama even more. At least the Sonny character adds a dash of humor.

And now, the long wait until March 8, 2019 when Captain Marvel comes out.

Finding good Peetimes was pretty easy for this movie. There were long establishing shots that were very easy to summarize.

The first and third Peetimes are the best. I only made the second Peetime an *emergency* Peetime because the story jumps between 4 distinct scenes, making the synopsis longer than I’d like.