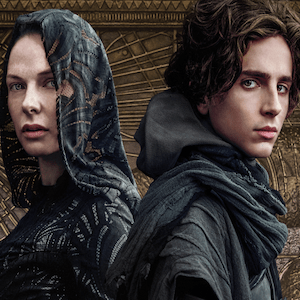 To hear all the kerfuffle going on you’d assume that what was coming was something akin to a new branch of the Star Wars mythology, an interim MCU phase, or a new found Tolkien saga. Instead, what we have is a film of an, allegedly, unfilmable novel… actually, series of novels if the franchise takes hold! The original novel, Dune, was published in 1965 — and 2022 will see Sands Of Dune being published despite author Frank Herbert having died in 1986.

Still, new authors continuing novel series after the original author has died is nothing new and has proven quite successful for James Bond, Jason Bourne, Sherlock Holmes, and Bertie Wooster!


So…if film anticipation is a spectrum, when it came to Dune I was on the low end of it, and RunPee CEO, Dan, is on the higher end which, I think, is fairly obvious from his review. Not just because he tells of how he’s read the novels numerous times but by the way that he talks of the characters and events with such insight and knowledge; when he says in the ‘Mistakes’ section that it is for the Dune fans, then I believe him as it all meant nothing to me. To me it was all new and the names and places were just sounds to my untutored ear. But, then again, so were Wedge Antilles, Jek Porkins, Chewbacca, Tatooine, and Alderaan when Star Wars hit the screens back in 1977. The difference was that there was no source novel to read beforehand.

Dune was released, over here, on 21st October — but it wasn’t at the top of my ‘must watch’ list. In fact, I went to see The French Dispatch, Ghostbusters: Afterlife, The Many Saints Of Newark, The Addams Family 2, and Venom: Let There Be Carnage first.

To be honest, it wasn’t like I hadn’t spent years following other franchises; Doctor Who, Red Dwarf, The Hitchhikers Guide To The Galaxy, Stars Trek and Wars… I’d variously read the books, watched the TV programmes, listened to the radio shows, and/or seen the films. I could queue up for a book signing or preview showing with the best of them.

Somehow, though, the Dune saga was a mystery to me. To this day I’m not actually sure why. My father was a prodigious reader and, along with chronic myopia, it is a trait I’ve inherited. We used to walk the mile or so from the flats we lived in to the library twice a week from before I started school. His genre of choice was science fiction and, again thanks to him, I was introduced to Isaac Asimov, Ray Bradbury, Philip K Dick, Kurt Vonnegut, and many others, but I don’t know why Frank Herbert never made it onto my reading list. I can’t claim to be a total Dune virgin though. I do have a memory of the 1984 version playing on a TV at home, so I may have got it out on VHS, but I can’t for the life of me remember actively watching it. Perhaps I got it to watch while I did the ironing but the ironing just got too engrossing.

Dune – What is the Litany Against Fear (and why should we care)?

What’s In The Box?

Fast forward thirty-five or so years and I find myself sitting in the cinema as the lights go down with no real idea of what to expect. I read elsewhere that Hans Zimmer had turned down scoring Christopher Nolan’s Tenet and Denis Villeneuve had turned down directing No Time To Die in favour of working on Dune, so they must have had some faith in the project. Denis Villeneuve had deliberately chosen to work on Arrival and Blade Runner 2049 in order to get Sci-Fi experience. I’d seen both of those, as well as Sicario, and enjoyed them, so I didn’t think that lack of direction would be a problem.

I suppose the problem lay in two main areas. The first was totally out of the control of everybody to do with the project…its place in time. Everything seemed to have been done before; that thing was reminiscent of the Mondoshawan in The Fifth Element, that other thing reminded me of a Jawa Sandcrawler from the Star Wars universe. It can’t be helped, but science fiction has been around for a long time (some scholars argue since 200CE)  and so things are bound to reappear.

But, the biggest problem I had with Dune was the pacing of it. It just seemed so slow and not much seemed to happen. Added to that was my total absence of backstory; they’ve left, oh…now they want to come back, and who are that lot, is that dream a memory, or a prophecy, or just a dream? I chatted with a friend who has read at least some of the books and she got a lot more out of it thanks to knowing what was going on.

Going back to my first problem area, Dune reminded me of Valerian And The City Of A Thousand Planets… beautiful visuals but the story wasn’t up to much. I can’t imagine I’ll be counting the days until part two comes out.

Dune – What is the Litany Against Fear (and why should we care)?