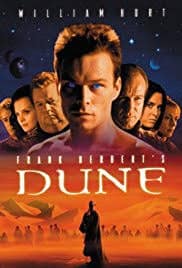 Until the last generation, when Peter Jackson proved The Lord of the Rings could not only be made into a successful film — but be so off-the-charts good that it took home 11 Oscar Awards — it was unheard of to succeed at translating most of the great sci-fi and fantasy epics of literature to the big screen.

That’s not for lack of trying. Larry McMurtry’s  Lonesome Dove book-to-film effort was a grand feat, but it’s the mini-series scale that made it work. The book is too big and involved to be made into one cinema-length film. Nowadays it would be at least a film trilogy, but I don’t think it needs a reboot — the 1989 miniseries is already a flawless snapshot of the last gasps of the Western Expansion. So they could make a new movie with these characters, yes, but I’d say it’s time to move on and  tackle other works of genre literature. (Also, who’s going to try improve on Tommy Lee Jones and Robert Duval?)

Watership Down is another epic tale in a brick-sized book, but it’s a hard sell, being entirely from the point of view of rabbits. And it’s absolutely not for children: the themes are mature and often mesmerizingly frightening. (The rabbits even have their own word for being stuck in a “mesmerizingly frightened” state — called Tharn –).


The 1978 animated feature has its fans, but most people who’ve loved the book pretend the movie doesn’t exist. (Seriously, it’s like a long scary drug trip.) Hazel’s troop of rabbits could now be done with puppets, animatronics, or CGI — instead of animation —  but the question here is “Why?”

We’ve seen entire CGI movies like Avatar, and they can be lush and sweeping films, but it still remains that Watership Down must be seen at rabbit-height and from rabbit-eyes. It would take a very special studio or director to take that on. This is probably why nobody is chasing this particular story at the moment.

Here’s a full length video of Watership Down, if you’re curious. (Note: they took the link down since I wrote this, but try to do a search if you’re interested.)

Lord of the Rings

In  the Post-LOTR and Harry Potter world,  the densest, longest, and most involving books can come alive on film…with inspired directing, gobs of studio money (and little studio interference), the right acting ensemble, and legions of dedicated crew members. Not to mention a crack PR team dropping hints and teaser trailers to excite the fans. (See: anything in the Marvel Cinematic Universe.)

The key to adapting epic novels to the big screen, it seems, is respecting the source story. Behind the sets, Sir Ian McKellen (as Gandalf) would pace around Peter Jackson with this LOTR novels, saying, essentially, “Peter! That’s not how Tolkien wrote it!” This is probably one of the many interconnected reasons why Lord of the Rings, previously considered unfilmable, worked so well.

It’s not that a script can’t deviate from a source, but the result should clearly be recognizable from it. Book fans will be waiting for certain beats, beloved details, fantastic settings worthy of a grand story, and most of all: a faithfulness of essence to its literary origins.

There’s a line between slavishly book-faithful recreations (as in Harry Potter and the Sorcerer’s Stone), and movies that recalls its novel by name only (Do Androids Dream of Electric Sheep, AKA Blade Runner, or Lynch’s Dune).

So, yes, finally. We get to Dune. It’s been tackled several times, although none were recent enough to benefit from the current seamless FX at our disposal. (Which doesn’t excuse anything at all. Look back on the practical effects of Star Wars: A New Hope, or Raiders of the Lost Ark, and tell me those films failed — they don’t.)

Lynch’s 1984 Dune remains a problem, and its not from poor effects.

It’s mainly that Lynch took Herbert’s book, tore a few pages he liked from it, and threw away the rest. It’s only “Dune” because the characters have the same names, there are Fremen and there are Sandworms, and Arrakis — the desert planet — is still called Dune. Otherwise, it’s a sprawling, sometimes grotesque mess, bearing little likeness to the story they aim to tell.

I admit Lynch got to the story’s conclusion just fine, but the path to get there was completely unorthodox. Lynch’s Dune has its fans, so I’ll let it lie.

I did like seeing Sting do some acting, so there’s that.

When SyFy made Frank Herbert’s Dune (2000) into a television miniseries, you can see there were many attempts made to be faithful to the book…but Sy Fy also took liberties in the telling. The main arguments I’ve heard seem to coalesce around the casting, that the actors didn’t look like the part, or didn’t act like the part. I’d say in both versions they got Jessica right, and Chani, and Irulan, for that matter, but the men’s roles are hit or miss. I think they got a lot more right than wrong, and crafted a personable, sensible, enjoyable tale without a whisper of heart plugs.

In my grading system, I’d give Lynch’s Dune a D+. (While I thought it was overall atrocious, he got a few things right, and that’s where the + comes in.) I’d give SyFy’s Dune a nice fair B score. It crumples a little as time marches on, but at least it’s recognizably Dune. SyFy even went on to combine Dune Messiah and Children of Dune as a second mini-series, which was ambitious, welcome, and mostly effective.  That one gets a B as well; maybe a   B+ — I’d have to see it again.

A lot of people mention Jodorowsky’s Dune (2013), which isn’t actually a movie. It’s more like an appetizer for a film, or a promise of Dune. You can watch the movie-length documentary for $3 on Amazon, or check out the free trailers on IMDb. However, if you watch the video, you can’t help but notice that it’s even stranger than Lynch’s version. There’s a lot of people who want to see this one picked up by the studios, but I’m not one of them.

The time is right to try Dune again, using a well-funded production studio, a director who is comfortable with an epic scale,  and detailed sets in grand desert locations. I want to see world-building. Toss in some smart humor, dynamic ensemble casting, and of course, magnificent sandworms: make me long to be a rider.

The movie should be a visual delight, engulfing the audience so much you’ll think you can smell the sietches, taste the spice, and feel the grit of sand, sand, sand.

Dune — once more, with feeling

So, it’s exciting news that director Denis Villeneuve plans to try his hand at a multi-film Dune. He says he hopes to make Dune into the Star Wars movie he never saw. “Most of the main ideas of Star Wars are coming from Dune, so it’s going to be a challenge to [tackle] this,” Villeneuve said. “In a way, it’s Star Wars for adults. We’ll see.” (Read the Dune News page on IMDb.)

It ‘s a promising start. We’ll record the news for this Dune project as it comes along.

While you wait for the right version of Dune to thrill you, entertain yourself with Fatboy Slim’s song Weapon of Choice. The lyrics are definitely Dune-inspired, even if the setting isn’t. But watching Christopher Walken putzing  around an empty hotel is a whole lot of awesome by itself…

Which version of Dune is your favorite? Do you think it will be done right by Villeneuve?