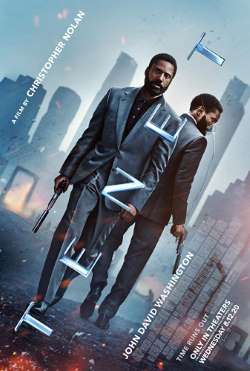 So it’s here…Tenet. The first big blockbuster to emerge following the outbreak of Plague 2.0.

Was it worth the wait? Well… I thought so!

Is it action packed? Yes. Is it beautifully shot? Yes. Is it well acted? Yes. Has Christopher Nolan managed to get all his hallmarks in? Yes.


So what’s Tenet about? Hmmm… there seems to be some way of going backwards and forwards through time, and the bad people are using it to do bad things while the good people are trying to get the better of them using it.

How does Tenet work? Good question… no idea! I don’t think it was properly explained, but you don’t really need to know how beyond the “you step into this big, rotating room and then step out going backwards in time… or forwards, depending which way round you go. Oh… there’s a window you have to look through as you walk into the turning room, and if you don’t see yourself coming out then you won’t. Trust me, it seems complicated but you don’t need to know the physics or the maths of it.

Just allow your “willing suspension of disbelief” to take over and enjoy the story.

In my humble opinion it wasn’t that complicated a story, especially compared to Inception, and nowhere near as confusing as Memento when that first came out. OK, it has a nonlinear narrative in that people and objects are travelling in different temporal directions — but in an organised, almost linear way, rather than just at random.

What the temporal inversion does is it grows on you. Things happen, usually a fight, and things just seem a little odd to start with… a strange movement or a slip in the wrong direction, but you let it slide in the general mayhem that’s happening onscreen. But then it gets a little odder and further out of kilter until the final big battle, when all sorts is going on in different directions!

The acting was good too.

John David Washington definitely has his dad’s acting chops, but then we saw that in BlacKkKlansman. Just known as The Protagonist, he starts off in the CIA until he is recruited to Tenet, which is even more secretive. Robert Pattinson surprised me. He was delightfully louche as Neil, who helps The Protagonist, and I am now actually looking forward to his turn as Batman.

Elizabeth Debicki is gorgeous, willowy, and emotive. Kenneth Branagh gives good service where he belongs… in front of the camera — sorry Kenny, Artemis Fowl still rankles! Dimple Kapadia was great as the go-between who seems to know everything that’s going on, who needs to do what, and, appropriately, when to sort things out. After that it’s a series of cameos from, among others, Michael Caine, Clemence Poesy, and Himesh Patel… all very worthy and helping to drive the story along.

The music was spot on. I heard the big brass punctuating the action and assumed it was another Hans Zimmer effort, but was down to Ludwig Göransson who did such a good job on Black Panther and The Mandalorian.

So… for me a solid A and, when the queues are a bit quieter, I’ll be going back for another viewing.

About The Peetimes: This movie has lots of high tech action sequences interspersed with masses of exposition. I think it’s probably easier to sum up what’s being said rather than failing to capture the visuals!

There are no extra scenes during, or after, the end credits of Tenet. (What we mean by Anything Extra.)

chevron_left Is there anything extra during the end credits of Tenet?
Movie Review – About Time (2013) chevron_right