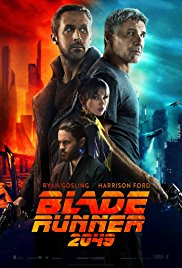 Blade Runner 2049 was almost an awesome movie. It was a worthy sequel that felt “right”, like settling in after a long break (of actual decades — in both real and movie time) to catch up on old events. Even the new characters seemed to carry echoes of previous incarnations. Hans Zimmer created a track with many beats evocative of the original Blade Runner score. The noir notes were missing, but it felt familiar and fresh all at once. You could feel the fingerprints of Ridley Scott all over the production, too.

The characters were compelling (except the central villain, unfortunately, whose motivations to be ‘bad’ were unclear, and gave us at least one strangely gratuitous scene). Ryan Gosling — the new Blade Runner — offered a purposefully subtle performance, acting mainly through very small facial and postural movements. Robin Wright gave us a law officer whose motivations and character alignment are unclear for most of the film, lending a sense of disorientation and hopelessness that matches the setting of the blasted, ruined Earth. The boss’s henchwoman had an interesting role, whose tone changed radically over the course of the story; her fighting style was used to devastating effect. And Harrison Ford? I didn’t think he had to stretch much. I’m glad Ford was back; he looks great, and he was used organically, but he seems tired. In this role, it works. Deckard is tired.

Almost all the characters underplay their roles (a clear directorial choice), and things move glacially for 90% of the film. The action scenes, by contrast, are lightning fast, coupled with set pieces that fit well into the universe we’ve seen, without feeling like a repeat in any way. The CGI was seamless, except where something is clearly intended to be CGI (you’ll see what I mean).


It’s a lot like the first Blade Runner, and just as thoughtful

Is this a violent film? Well, it’s a lot like the other Blade Runner, so yes in moments, and not at all in others. Is there humor? No. I smiled at a couple of things in a sardonic way, or at mild nods to things that came in the previous film. Romance? Again, there’s about as much as we’ve seen before, with a few tender beats snatched from the grip of a mostly horrifying reality. Earth is now even more of a desolate wasteland. It’s all very beautiful, stylish, and lovingly filmed, and quite, quite grim. This movie definitely puts the ‘dis’ in dystopian. 🙂

One thing this film was: weird. There were things that seemed weird JUST to be weird, in a cool and visually arresting way. Maybe an extended version will explain some of it away, but I honestly don’t think that’s necessary. It’s the future, and while things are not so good in this future, society and culture keeps ticking along in new ways.

You should watch the original Blade Runner again, first

There were also a lot of symbolic images. I want to rattle off a bunch of them, but won’t. You’ll enjoy finding things yourself. I’d recommend doing a re-watch of the original film (the Director’s Cut, to be specific), just to make sure you catch the moody callbacks to the first Blade Runner.

There are a few other things that would be spoilers to mention, and it’s probably a spoiler to say there even are spoilers, so I’ll stop there. I suggest that you use the Recommended Peetimes we’ve provided so you don’t miss those moments.

In an odd note, I have never in my life seen a more quiet and still audience — quite a feat for a 2 hour and 42 minute film. Things onscreen were very silent for long stretches, and nobody in the theater rustled, coughed, laughed, gasped, or even breathed, as far as I could tell. It’s a testament to how invested people were in this sequel. Interestingly enough, most of the audience on opening night were older people. There were very few young men and women present. Was this an audience of people who saw the original Blade Runner in the theaters the first time? Seems likely.

This isn’t a story by Philip K. Dick per se, but they do give him a reference credit at the end of the film. It’s very much his oeuvre, in a sense. He likes to ask: Who are we? Are we our memories? Who has a soul? Thoughtfully, these questions remain ours to answer.

One question is put to rest though…is Deckard a replicant? You’ve probably decided this on your own long ago, but now you’ll know for sure.

Very enjoyable – see this on the big screen to catch all the minute details, setting nuances, and build up in tone. Now. Don’t miss it, if you liked the original Blade Runner in any way. Hey, tears in the rain…