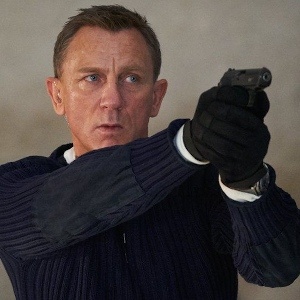 I’ve already gone on record here at RunPee about how I have enjoyed Daniel Craig’s tenure as Bond, how I’ve liked the story arc throughout the films, and how much I’ve been looking forward to seeing No Time To Die. I may as well tell you at the start about my disappointment… there wasn’t any! I struggled to find Peetimes for the simple reason that I was hooked from start to finish; I had to keep reminding myself to make notes so I could work from them later.

So, in No Time To Die we have the conclusion of Daniel Craig’s take on James Bond 007. In a step that is unique amongst the individual offerings of the Bond franchise, this is an end to a particular incarnation; we saw him earn his 00 status in Casino Royale and No Time To Die sees him in retirement, to start with… obviously! Obviously, his status throughout the film is something I’m not going to mention for two reasons; 1, it’s a wee bit complicated, and 2, SPOILERS!!! I’ll be honest in that this review would be a lot easier to write if I didn’t have to worry about spoilers.


A Martini, Shaken Not Stirred

So let’s ignore all possible spoilerism and just concentrate on the film. To start with No Time To Die is a, pretty much, non-stop roller coaster of action and excitement. It isn’t your typical, standard Bond film for a variety of reasons, not least because, like DC’s other efforts, the story carries on. This is, as near as makes no difference, a sequel to Spectre in the same way that Quantum Of Solace was a sequel to Casino Royale and Skyfall just fell nicely in between.

I’ll be honest and say that I didn’t really know anything about Cary Joji Fukunaga before No Time To Die. Danny Boyle I’d heard of and loved! Shallow Grave, Trainspotting, The Beach, 28 Days Later, 127 Hours, etc. When it was announced he was involved I thought “Of course he is! Did you not see the Bond section of the 2012 Olympics opening ceremony? He got DC and the Queen jumping out of a helicopter!” But then, for whatever reason, he pulled out and was replaced by Cary Joji Fukunaga. I was disconcerted but I thought that Eon probably knew what they were doing so it should turn out for the best and decided to just let it go.

Parting Is Such Sweet Sorrow

By now in the DC007 world we’ve established our dramatis personæ; M, Q, Moneypenny, and even Felix Leiter, Blofeld, Tanner, are all happily ensconced in our current interpretation of MI6 and its friends and foes. While the characters may have been around for over half a century, the faces have settled into position like a particularly comfy pillow on a favourite armchair. While Bernard Lee, Lois Maxwell, and Desmond Llewellyn may have been the cinematic geneses of the Bond SIS that some of the older amongst us (Yes, I do mean me!) will have grown up with I, for one, am quite comfortable with Ralph Fiennes, Naomie Harris, and Ben Whishaw stepping into their shoes. In some ways the biggest problem I’ll have with Bond 26 will be the supporting cast; Daniel Craig has wisely let the character age with him over the past fifteen-plus years and let him bow out with dignity. I’ll be taking a seat on the front row when the debates start about his replacement but I do fret over what will happen to the other characters who now seem so familiar.

Elliot Carver, Alec Trevelyan, Hugo Drax, Have I Missed Anyone?

It’s often said that what makes or breaks a Bond film is the bad guy. Goldfinger, Scaramanga, Le Chiffre, Dr No all have made their mark along with many others.

Good grief, Ernst Stavro Blofeld has had almost as many incarnations as Bond himself! Are No Time To Die’s baddies in the same league? The trailers have made it clear that Blofeld (Christoph Waltz) comes back but how much can he do strapped in a box in HMP Belmarsh? The real baddie is Remi Malek’s Lyutsifer Safin aided by Dali Benassalah as Primo. They are ready to do unspeakable things to the world with a DNA targeted virus developed by Valdo Obruchev (David Dencik).

Who Is On Our Side?

So much for the sinister side, how about the dexter? It’s no secret that Lashana Lynch is one of the new generation of 00 agents but does she fit into the size 007 shoes. Quite simply, yes. She has to face off and fight with Bond on a few occasions throughout No Time To Die and always manages to hold her own. Throw in what is, in essence, a cameo for Ana de Armas as feisty CIA agent Paloma and you can see that the good side has plenty of balls if surprisingly few testicles.

What Else Is New?

As has been a refreshing difference throughout Daniel Craig’s stint as Bond, our hero manages to treat the women he encounters with more than just a semblance of respect. Rather than hopping in and out of bed with any woman and without any reason this Bond has proper romantic encounters only with women he has relationships with… yes I used the “R” word about a Bond film! Maybe Dame Judi’s M has stopped that particularly misogynistic trait, hopefully for good.

Shut Up And Tell Us What You Think!

I thoroughly enjoyed No Time To Die and think that the final outing for Daniel Craig is a fitting tribute to a fine actor and, from the various documentaries, chat shows, and interviews of him I’ve seen, a really nice guy. It was beautifully shot, full of exceptionally well-choreographed action, and was a very good story. I think that I will definitely be going back to the cinema to watch it again. The only question is whether or not to watch the first four Craig Bond films before or after… or both!

Oh… don’t get me started on the ending!

About The Peetimes:
This is my first job doing Peetimes since COVID. I hope I did well. Dan (RunPee co-creator) will be double checking these Peetimes once NTTD is out in the USA.

There are no extra scenes during, or after, the end credits of No Time to Die. (What we mean by Anything Extra.)