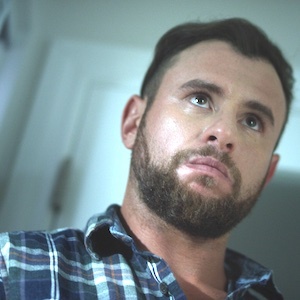 A Stalker In The House, or Stalker House (the former is how it’s listed on IMDb,  while the latter is what it says on the title cards), is one of those films which has you looking at the screen aghast and thinking, “did you really just do that,” when one of the characters does or says something so monumentally boneheaded you wonder how these people manage to sit the right way round on a toilet seat. But, being honest, that’s not really a fair accusation to point at this or any other film. I mean, the whole, “don’t go in the basement”, “oh, they’ve gone in the basement…you fool,” scenario has to take place — otherwise, we wouldn’t have the tension building up about whether they’ll survive the encounter or not.

But, I guess, the big plus of A Stalker In The House is that it creates a response from the viewer.

Admittedly the responses might not have been what writer/director Jared Cohn wanted — way more facepalms than frights — but there were responses and, if there are responses, then engagement can’t be far away; the fact that I’ve watched A Stalker In The House three times while writing this must say, at the very least, that it wasn’t boring. It was well made and well acted. Some of the responses were unbelievable but not badly acted. I guess that, if the unbelievable bits were delivered in a way that you know you would have acted, then we wouldn’t have more than about ten minutes of footage to play with.


You Made Me Do This!

A Stalker In The House starts with a domestic incident between Mike (Jack Pearson) and Alexa (Scout Taylor Compton) which ends tragically for Alexa. Incidentally, in the publicity much is made of the inclusion of Ms. Taylor Compton and her appearances in the Halloween franchise, so it came as a surprise that she didn’t survive past the first few minutes. Regardless, before the title card appears, we know that Mike is more than a bit of a psycho with a nasty, homicidal temper; we don’t know whether or not Alexa was the first person to fall at Mike’s hands, but the stage is set and we know what he is capable of. As a result, when he meets Jen (Veronika Issa), we know that problems lie ahead.

Many of the problems arise due to the way Jen is written.

I know it is by a man but, surely, the #MeToo movement must have filtered through, and even fictional women should know that they can say no and expect it to mean no and that anyone who seriously argues against your option to not have sex with them must be exhibiting behaviour that it is best to avoid.

However, again, there has to be a certain amount of latitude for the story to progress but, even so, the Mike character has flashes of quasi-psychotic rage; the Jen character is studying psychology but manages not to pick up on it; her friend Lisa (Michelle Ng) tells Jen to do what everybody has been saying since the first few minutes…block Mike’s number.

And so the improbable events keep on happening.

Sorry I Was A Jerk Last Night

Before I fall foul of the ever-present spectre of spoilerdom, I’ll have to stop on the specifics and move into the generalisations. Ultimately, gaping plot holes aside, A Stalker In The House was not the worst use of an hour and a half I’ve come across. I don’t know how much of the small (seven people) cast was down to the equally small (about $400,000) budget, or down to restrictions imposed by Plague 2.0, but the cast seemed to be made up of a few “proper” actors and filled out with other crew: Michelle Ng (Lisa) is also the associate producer, Nicholas Ryan (Rick the chef) is the co-producer, and Jared Cohn himself is Patrick the neighbour.

I don’t want to make it seem like they were desperately trying to cast parts for A Stalker In The House and just settled for whoever happened to be around. Those three all have a string of acting roles to their credit and it was only after watching that I checked and noticed their other responsibilities.

For me, though, the stand-out is Jack Pearson as the unremittingly psychotic Mike. He does have a bit of a look of an undiscovered Wilson brother… Owen, Luke, Andrew, and Jack? Looks aside though, he is scarily believable as a psychopathic stalker. I know that is a bit of a back handed compliment, like being the handsomest man in the burn unit, but he does inhabit the character totally.