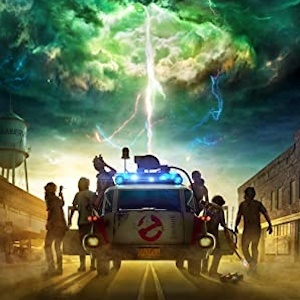 I laughed and I cried; Awwwwed and applauded. It was more than a perfect homage to GB84. It added fun new characters that I hope we’ll see moving forward in the Ghostbuster’s Universe. And I want to thank the writer/director Jason Reitman for not taking a deuce on a favorite childhood movie, as is so often the case with movies the revisit our favorite universes. (I’m looking at you George Lucas.)

I was really impressed with the acting performances given by the youngsters. Particularly Mckenna Grace as Phoebe—Egon’s granddaughter. Her performance was spot on, which is a testament to her acting skills and Jason Reitman’s writing and directing. Finn Wolfhard was also really good as her brother—Trevor—But his role didn’t have the demands that Grace’s did. Logan Kim, as Podcast, was also really good. His character/role had the potential to be really lame, as is the case with many of the comedic sidekicks.


I don’t want to spoil anything for anyone. Suffice to say the references to the original Ghostbusters are frequent and all done very tastefully, as if they belonged there for a reason and not just placed for the sake of placement.

I really think fans of the original will be pleased.

We’re pretty happy to find 3 pretty good Peetimes. This is one of my all-time favorite movies. I was very careful to avoid the important references back to GB84, but it was unavoidable to not include any at all.

I would recommend the 2nd Peetime. It’s not the longest, but it’s near the middle of the movie, and part of the Peetime involves characters talking about things we already know.

There are extra scenes during, or after, the end credits of Ghostbusters: Afterlife. (What we mean by Anything Extra.)

Plot
When a single mom and her two kids arrive in a small town, they begin to discover their connection to the original Ghostbusters and the secret legacy their grandfather left behind.

chevron_left RunPee Weekly Newsletter #88 (November 17th, 2021)
Is there anything extra during the end credits of Ghostbusters: Afterlife? chevron_right