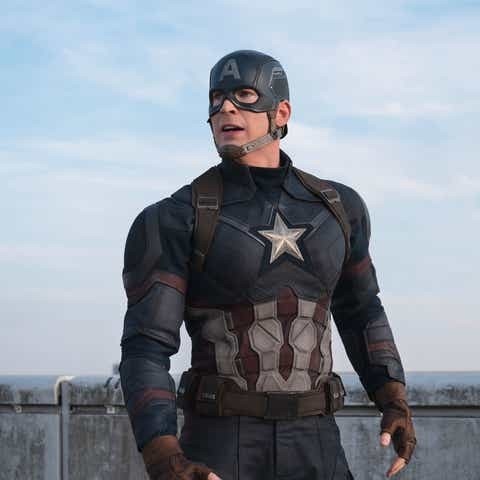 First off, with regards to The First Avenger, I’m surprised we didn’t have a review for this up years ago. We fully believed we’d reviewed everything in the MCU. A RunPee fan just pointed out this gap. So here the review is.

Plot (Spoilers)
It is 1942. America has entered World War II, and sickly but determined Steve Rogers is frustrated at being rejected yet again for military service. Everything changes when Dr. Erskine recruits him for the secret Project Rebirth. Proving his extraordinary courage, wits, and conscience, Rogers undergoes the experiment and his weak body is suddenly enhanced into the maximum human potential. When Dr. Erskine is then immediately assassinated by an agent of Nazi Germany’s secret HYDRA research department (headed by Johann Schmidt, a.k.a. the Red Skull), Rogers is left as a unique man who is initially misused as a propaganda mascot; however, when his comrades need him, Rogers goes on a successful adventure that truly makes him Captain America, and his war against Schmidt begins.

Thoughts before the First Avenger rewatch

I admit this is my least favorite Phase One movie. Well, after The Hulk. For one thing, The First Avenger is a war film: not something I like much (JoJo Rabbit and 1917 excepted). And also: Cap is so pure. He’s got that apple pie Superman thing from the 80s. I do like early Superman, but I don’t need to see that twice. Cap doesn’t develop significant layers until Captain America 3: Civil War, and only truly comes into flower as a full individual in Avengers: Infinity War.

But I’m now jumping forward ten years in time with the MCU. (Not unlike Cap jumping forward 70 years…) Note: there are mild spoilers ahead for the MCU though Avengers: Endgame.


Circling back to First Avenger, there are a lot of Nazis in this one. And the first Infinity Stone (inside the Tesseract), which is cool to go back and see after all this time.

The only poor effect in the franchise…

I don’t exactly buy the effect used to make Rogers look like a smaller guy — his head/deep voice doesn’t seem to sit right. This is honestly the only bad effect I can recall in the entire 23+ MCU franchise. (BTW, Dan and I noted that after zero MCU additions during 2020, this year we will have FOUR new movies, with another the next February, and three MCU short series on Disney+. So soon there will be close to 30 MCU stories. And since we assume WandaVision, Falcon & Winter Soldier, and the Loki series will be rolled into the larger storyline, you better get cracking now.)

But everything else looks great!

Bucky Barnes and Steve Roger’s friendship is nicely handled, and we believe in their love for each other. That love has to be built from something to carry us through The Winter Soldier and Civil War. That Rogers is willing to throw everything over for his friend in the subsequent movies needs this foundation. It works.

I’m also left wondering why we don’t have more supersoldiers on board to protect Earth. The supersoldier serum worked for Steve and Bucky. It seems like a painful and possibly dangerous experience, but that serum was given to Steve in the 1940s. By our time it’s probable they perfected it, and we do see more such supersoldiers in Civil War. Why not give the serum to the normal-powered Avengers, like Sam Wilson (Falcon) and Clint Barton (Hawkeye)? I bet Peter Quill would take it — if only to compete with Thor (who is presumably still on Peter’s ship).

Moving on. Looking at Cap’s shield all damaged — are those bullet points from the shots Agent Carter fired at him early on?

Nice comment from Red Skull about the ‘ride of the Valkyries’ — little did we know we’d actually see that in a future movie. Also, his attempt to hold the Tesseract in his bare hands…we see how well that goes in Guardians of the Galaxy.

When Red Skull asks Steve, “You don’t give up, do you?” — that sums up Cap all the way. Even Thanos was impressed in Infinity War. By Endgame, we see that even against impossible odds, he’s all in.

Of course, when Cap and Peggy talk about a rain check on their dance, after all this time, we can’t help but feel all the feels. Glad there was a beautiful callback to this by Endgame, even if it made continuity issues in the timeline. Perhaps the following films will put these issues to bed.

In the first scene where the expeditionary team cuts into Cap’s frozen ship, note the cutting is in the exact shape of Captain America’s shield. When it drops to the floor of the ship, we see it’s even like the shield in three dimensions.

Hugo Weaving! I forgot Agent Smith was in the MCU. He’s hamming it up wonderfully. Also, the line about the Fuehrer digging “for trinkets in the desert”…is that a reference to Raiders of the Lost Ark?

I can’t not mention the garbage can lid as an early Cap shield, and the first use of “I can do this all day.” We know, Cap, we know.

Lots of cool stuff in the Modern “Marvels” Pavilion. Hints of Avengers to come. It’s fun to see Steve has a cordial relationship with the senior Stark, especially knowing what’s to come in Civil War.

Steve to Bucky: “You’re taking all the stupid with you.” Awwww. Great future callback for much, much later.

Tommy Lee Jones is in this! I totally forgot. Tommy Lee plays the same role he does in Men in Black and The Fugitive, but it somehow always works.

The “flagpole” scene shows Steve’s innate tactical cleverness with an interesting nonchalance. He earned that ride back to the base with Agent Carter! This type of ingenuity illustrates several times how Steve is worthy of being a leader.

The “grenade” scene is the single most important moment in all the MCU to describe who exactly Steve Rogers is, with or without the serum. Courage, dedication, and self-sacrifice are what make an Avenger a hero. Notice that everyone else runs away from the grenade. Steve never hesitates to throw his slight body around it and shouts for everyone else to go. Steve does #WhateverItTakes to contribute.

Other neat things to note: Stan Lee’s cameo, the appearance of the Howling Commandos, and the idea of…er…’Fonduing.’ I’ll have to try that sometime.;-)

Thoughts after the First Avenger rewatch

So, Captain America: The First Avenger is better as a rewatch.

I don’t remember loving the original Captain American film when it came out, but when returning to it after the momentous events of Infinity War and Endgame, it plays a lot better. Amazing to see the early threads seeded here that become recurring motifs/important themes later. I’m glad I did this rewatch now and recommend it to anyone who might not have been too impressed with Cap’s first solo outing then.

Last thought: Is Cap really the FIRST Avenger? Arguments can be made that this title could go to several others in the MCU. Oldest Avenger: Thor. First Avenger approached by Fury: Tony Stark. Hank Pym was the first Ant-Man and might have been superheroing before Steve Rogers got dosed. First time in the chronology we see the words “Avenger Intuitive”: Captain Marvel.

Who is the real first Avenger? Let us know in the comments below.

About The Peetimes: 3 Peetimes to choose from. The best one is around the halfway point.

There are extra scenes during, or after, the end credits of Captain America: The First Avenger. (What we mean by Anything Extra.)