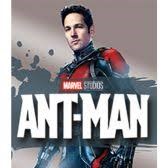 I really used to like the original Ant Man. I thought it was underrated, charming, funny, and a lighter take on the Marvel Cinematic Universe. And that’s how I remembered it until my rewatch last night.

What I forgot: since it came out, a lot more amusing  and enjoyable MCU films came along, ones that made me laugh harder, thrilled me visually, and set up characters I cared for in a visceral, deeper way. Now, having rewatched Ant Man’s 2015 origin story after having viewed top of the line films like Thor: Ragnarok, the Guardians films, Black Panther, Civil War, Spiderman, and Infinity War, I’m suddenly underwhelmed. Paul Rudd as Scott Lang does what he can, but aside from his sweet little kid, I didn’t feel much of anything for anyone else. I cared more for poor Antony the Ant than the cast of people, which isn’t a good sign.

And the plot. It was just about another set of guys in another set of suits. Really. A guy of dubiously good morality in a tech suit, plus a clearly definite bad guy in a meaner suit, exploiting the tech. Am I describing Iron Man or Ant Man?


We now have normal guys in suits up and down the MCU — Iron Man, War Machine, Falcon, Ant Man. (Batman is the same, but hey, different universe.) I’m not sure we needed to put Wasp in yet another suit, but it’s a gal, so that’s new. Yay?

Who else dons supersuits? Spidey finally has a cool tech version, and so does the Black Panther, but those are also dudes with legitimate innate superpowers.  And lest I forget, Bruce Banner now sports a Hulkbuster Suit, for days when the rage monster refuses to come out and play.

Back to Ant Man. What really sets him apart from the other suit guys are two things: he’s got an ant army, and can move back and forth between many sizes — from normal, to tiny, right up to gigantic (making him “Gi-Ant Man”), and then back down to the subatomic, in the Quantum Realm.

Now, let’s pick this apart. At a normal size, he’s really just a cat burgler with engineering skills wearing in a leather jumper. We didn’t see him do the Gi-Ant thing until the (far superior) Captain America: Civil War. [pullquote]His role in the Quantum Realm was so short that it wasn’t more than a cameo excursion. (Hopefully, in Ant Man and the Wasp we’ll get a lot more quantum goodness.) So, what did he really do in his origin story?

Well, Scott had a cool fight with Falcon: it was brief, but fun, and he was adorably fan-girly in meeting an actual Avenger. He had cute scenes learning to control the various ants and bonding with Antony. Um. Hmmm. He kissed a girl in an awkward transition. And the bad guy smushed some sweet little lambs, which I forgot happened and never want to see again.

So, what about those ants, anyway? I was able to stop the screen and write it all down. Keep in mind most of this entymological science is totally made up:

So when the critters show up in the next movie, you’ll know which ants do what, for what its worth. But what I’m really looking forward to is seeing how the Quantum Realm relates to the larger Avengers storyline. I mean, it HAS to. Because another stand-alone plotline would not be very satisfying after what Thanos just did to the universe.

It’s still a well constructed movie; it’s just not very exciting. I don’t mind a ‘small’ story — I often prefer it — but it has to be good.

How the Quantum Realm Offers Possible Insights to Avengers 4