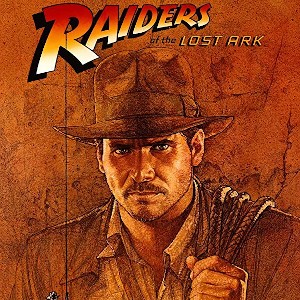 The toilet cistern is the sound of the lid of the Ark of the Covenant being removed, the fingers through a cheese casserole stands in for the slithering snakes, the Honda Civic is the rolling boulder trap, the leather jackets are for the body blows, and the synthesizer that Sound Designer Ben Burtt used to make R2-D2 “speak” was the same one that he used for the deep thrumming noises made by the Ark when it was opened or killing rats on board the Bantu Wind. Rather like a magic trick, it’s no fun when you know how it’s done!


30th July 1981 saw the UK release of Raiders Of The Lost Ark. Back then, my wife and I used to go and see a film every week at a marvellous old Art Deco picture palace called the Davenport theatre just outside Stockport in the NorthWest of England. It was a purpose-built theatre that had been retrofitted to show films on a huge screen as well as a smaller screen to allow it to double the programme possibilities. Every week we would go and watch whatever was on. Some weeks it would be the big screen, sometimes the small. Some weeks it would be a play, ballet, opera, or concert; Elkie Brooks, The Hollies, and even Tina Turner played the Davenport! We just used to pick which of the two options we fancied and bought the tickets.

It’s Not The Years, Honey, It’s The Mileage

Then the long summer holidays began. We never really bothered about going away so our weekly trips would be continuing. Time Bandits, Le Dernier Métro, Gregory’s Girl, Excalibur, Chariots Of Fire, Blow Out…hey all made their way, eventually, to the Davenport; remember, this was the pre-digital era so films had to be moved around the country on reels of film stock, rather than downloaded to every cinema in the country.

After a few weeks of seeing the trailers and hearing good things about it, we said “Next week we’ll have to see that, what is it…Raider Of The Lost Arks?” but the universe threw its various spanners into the mechanism that is life and it wasn’t on the following week. In fact, it wasn’t on for a few weeks and, as these things tend to go, we learned more about it and decided that it might have been all right after all.

Then, just as we were resigning ourselves to the five-year wait before it came onto TV – again, video rental was yet to become a staple of your local newsagent – it came back and we booked tickets straight away. Two of the Pullman’s slap in the middle, please!

Thank You, My Friend, But I Think We’re All Very Comfortable Up Here.

Yet another thing that was different back then was the running order of the night’s entertainment. Nowadays, when the lights dim, you’ll get a few adverts followed by a few trailers; usually about twenty minutes worth. Then it goes straight to the BBFC certificate (or local equivalent) and the film starts.

Back then things were different. You could be in there for over an hour before the film you’d paid to see actually started. You really got a full evening’s entertainment. There’d be local adverts as well as national ones, then there’d be the trailers. Incidentally, trailers are called ‘trailers’ because they used to be shown after the main feature. That was back in the days when the end credits were a card saying “The End” in fancy script. I wonder how many trailers would be seen these days if you’d had to sit through ten to fifteen minutes of scrolling names before they were shown?

Next up would be the supporting feature. This would be a, usually, shorter film made on a lower budget with lesser-known names involved. Perhaps the forerunner of the independent films of today. They’d be a chance for up-and-coming talent on either side of the camera to cut their teeth. You’d get different length ones depending on how long the main feature was.  Gandhi, weighing in at over three hours, didn’t have anything to support it; Raiders Of The Lost Ark was a little under two hours and so had a twenty-minute supporting film. I can’t pretend that I remember what the support was when I saw Raiders Of The Lost Ark but I did see a film called Late Flowering Love and I found out, while reading for something else, that the supporting film for Raiders Of The Lost Ark was a film called, guess what… Late Flowering Love!

I was In Love. It Was Wrong And You Knew It!

What strenuous singles we played after tea,

We in the tournament – you against me!

It was years afterward that I learned that Joan Hunter-Dunn was an actual colleague about whom Betjeman had an unrequited fascination and the poem imagined a parallel life with her… Betjeman was a very naughty boy!

Following the ‘B’ film would be some more adverts but, this time, they were for choc ices, Kia-Ora, tubs, and wafers; basically, all the stuff that was sold in the auditorium. Then the lights would go up again and you’d see an usherette with an illuminated tray hanging from their shoulders. Now you could buy packets of sweets, drinks, and ice creams on the way in but, remember, that was anywhere between an hour to an hour and a half earlier. For some reason, back then, I never remember popcorn being a part of my cinema visit but you could get a hot dog. So you’d trot down to the front and get more snacks. My favourite was always a carton of Kia-Ora and a tub… I remember the transition from little wooden to plastic shovels to eat your ice cream with.

Usually, when you were halfway through your choc ice, lolly, or tub, the lights would go down again but, this time, it’s the big film. After somewhere between sixty and ninety minutes the reason you were there, the reason you’d spent your time and money, finally started.

Then Raiders of the Lost Ark finally begins…

And what a start it was! The Paramount logo appears but then fades from a drawing of that well-known mountain to a live shot of the mountain. A motley crew of ne’er-do-wells are trekking through a jungle until one finds a carving that scares the living daylights out of him. It’s South America, 1936. While the leader consults a map, one of the less loyal members of the group draws a gun on him. Drawing back the hammer causes a click which gives him away.  The leader spins around, pulling out a bullwhip and, with a crack, disarms the traitor. He steps out of the shadows and we see him properly for the first time… Dr. Henry Walton Jones Jr, or Indiana to his friends.

Then starts the now-famous opening sequence. Ten minutes of puzzles and traps which Indy has to negotiate to get to the golden idol; the sorts of puzzles and traps that would resurface nearly fifteen years later in the Tomb Raider series of games. Nowadays those ten minutes (twelve minutes and forty-nine seconds to be precise) would be part of a pre-titles sequence; the credits here are just played out quietly over the initial slog through the jungle. The weight trap being tricked, almost, by a bag of sand, the giant, rolling, stone ball, the spiders, the whip swing, the deception by an impossibly young Alfred Molina in his feature debut which got cut short by a forgotten trap…there’re more iconic action scenes in that opening twelve minutes than in the entire running time of a lot of action and adventure films!

But I Take It, I Bury It In The Sand For A Thousand Years, It Becomes Priceless…

And that’s just the start. From the escape in a snake-riddled aeroplane we cut to a leafy, venerable institution at which Dr. Jones delivers lectures on Archaeology. At least he tries to but his class seems full of adoring female students, one of whom has the famously adorned eyelids. But then, in walks Marcus Brody (Denholm Elliott) to tell him of a couple of army intelligence bods with news of Nazis searching for some religious relic that would make them invincible.

From then on it’s a non-stop roller coaster of a ride; for the remaining ninety minutes it is a pretty much relentless onslaught of excitement, threat, peril, and thrills, with a fair scattering of humour along the way to lubricate the wheels of the ride.

So, forty years on, does Raiders still stand up?

To my mind, yes. The Nazis are still villains; no amount of re-writing by the extreme right-wing will manage to change that. While the female college students are painted as a bit soppy, that is only short-lived and serves to set up the eyelid joke. Besides, is there a more spirited, self-sufficient, and capable character of either gender than Karen Allen’s Marion Ravenwood?

The stunts still thrill, the action sequences still excite, the jokes still raise a smile. There is a theory posited in The Big Bang Theory that states that Indiana Jones is totally redundant to the plot of the film and had no effect on the events as they turned out. Amy Farah Fowler explains that if Indiana Jones were not in the film the Nazis would still find the Ark of the Covenant, would still have taken it to the island, then opened it up, and all would have died. The point she missed is that without Indy, the Americans wouldn’t have then got the Ark back and hidden it at the back of that storage facility.

Regardless! It is still a fantastic film which I’ll happily watch anytime; I’ve been known to end up sitting on the back of a sofa because it was playing in a room I happened to walk through!

chevron_left Is there anything extra during the end credits of F9?
RunPee Weekly Newsletter #68 (June 30, 2021) chevron_right