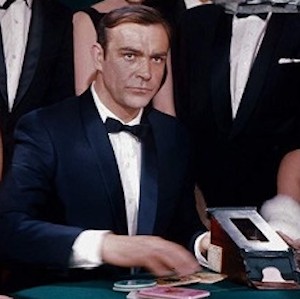 I tried watching the Bond films in order with my father years ago.  He even bought me the whole series on DVD.  We only made it halfway through Goldfinger before getting interrupted.  I didn’t see all of Goldfinger until it played in cinemas again a few years ago.  So I’ve been meaning to get to Thunderball (aka James Bond underwater) for a long time.  Maybe I built it up a little too much in my head over the years.  Maybe it’s just that Goldfinger is such a hard act to follow.  For whatever reason, I simply didn’t enjoy Thunderball half as much as I expected to.  Previously, I had been sick of Dr. No as I had seen it several times.  Thunderball makes me appreciate what a well-done film Dr. No actually is.

The movie opens with Bond taking out a villain who has faked his own death and is in drag, pretending to be his own widow.  It’s telling that this is one of the most violent scenes in the film.  Is part of the reason Bond feels compelled to destroy this person because they represent one of Bond’s worst fears (being with a woman who doesn’t fit his limited definition of femininity)?  It’s hard to root for Bond when he’s beating up someone in a dress.  Later, he repeats a move from Goldfinger where he positions a woman to take the blow/gunshot meant for him; this feels less than gentlemanly.

This scene is followed by the opening credits with a title song by Tom Jones that is utterly forgettable, especially compared with Shirley Bassey’s powerful anthem from the previous film.

The villain is a man named Largo (Adolfo Celi).  He’s not really that interesting.  The main thing he has going for him is that he has a pool full of deadly sharks.  (No, they don’t have frickin’ laser beams attached to their heads.  Yes, this is where Austin Powers got that gag.  I think the villain in License to Kill has sharks too from the little bit of it I remember watching on HBO as a teenager.)

Largo’s biggest sin is his lack of an interesting henchman.  Instead, he has a small army of them that are pretty much identical.  Most of them shoot/get shot with spearguns during a climactic battle.  So. Many. Spearguns.  Largo has a great scheme:  stealing two nuclear warheads and using them to extort money from world governments.  Yet the film somehow makes this as exciting as watching paint dry.  Largo has a mistress named Domino (Claudine Auger) who is pretty, but bland.  It’s hard to compete with previous Bond girl Pussy Galore, the villainous pilot with slick fighting moves and her own flying circus.

Bond uses a jet pack during the opening scene.  It’s the most interesting gadget in the film, even if it looks a bit dated.  Q actually meets Bond in the field this time instead of in the lab, and their interaction is one of the better scenes in the film, with Q (Desmond Llewelyn) berating Bond for how he treats the technology.  Other gadgets include a Geiger counter disguised as a watch, an underwater camera. a miniature flare gun, a rebreather device that lasts for four minutes underwater, and a homing device pill.

Connection to previous films:  Blofeld (Anthony Dawson) from From Russia With Love makes an appearance, reminding the audience he is still pulling the strings at S.P.E.C.T.R.E.  S.P.E.C.T.R.E. is, of course, the evil organization first mentioned in Dr. No.

I doubt this is a Bond film I’ll be revisiting often.  I’d actually rather watch Dr. No again for the fifth or sixth time.  This is the first time I realized the producers have recast the role of CIA agent Felix Leiter for each film.  In this movie, he’s played by Rik Van Nutter in perhaps the least interesting performance of the three Felix’s so far.  He also has a strange resemblance to Clint Eastwood.  I know I’ll probably encounter worse Bond films in the series.  But for now, this is my least favorite.  I’m hoping I enjoy You Only Live Twice more than this.

chevron_left Is there anything extra during the end credits of Peter Rabbit 2: The Runaway?
Movie Rewatch Review – Captain America: The First Avenger (2011) chevron_right