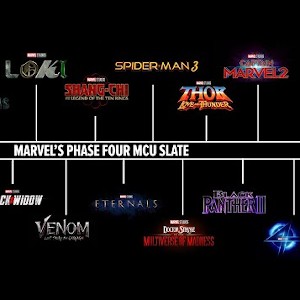 It feels like we’re rounding the corner from the effects of COVID19, and if the vaccinations can outpace the variants then maybe, just maybe, we’ll have a normal second half of 2021. I’m sure that’s what movie lovers, and especially movie theaters, are hoping for. And the MCU is certainly going all in on a return to normalcy because starting in July there will be a new MCU movie released every month except for August and October.

The Marvel Cinematic Universe officially kicks off Phase 4 with:

What we know: The film stars David Harbour as Alexei – a.k.a. The Red Guardian – Florence Pugh as Yelena, O-T Fagbenle as Mason, and Rachel Weisz as Melina.

The story takes place after Captain America: Civil War. The plot sees Natasha returning home to the former Soviet Bloc to deal with some unresolved issues and face her spy “family”.

According to director Cate Shorthand: the film will serve as a passing of the baton from Natasha to Yelena, and a “last hurrah” for Johansson, who will leave the MCU after the project. So it’s going to propel another female storyline.

Shang-Chi And The Legend Of The Ten Rings

In the comics, Shang-Chi was the son of legendary literary villain Fu Manchu, but considering Fu Manchu is one of the few IPs not owned by the Disney, fans speculate that Shang-Chi’s father may turn out to be the “real” Mandarin, teased in the Iron Man 3 Blu-ray short film “All Hail the King.” The 10 rings the Mandarin wears have cosmic origins, which may play into the larger Phase 4 story.

The Eternals are a race of powerful proto-humans engineered by the Celestials to harness vast amounts of cosmic energy. Infighting and wars between the Eternals and another Celestial experiment, the Deviants, followed.

The story is centered on an Eternal named Sersi (Gemma Chan) with the powers of flight, strength, immortality, and molecular manipulation.

No Way Home seems destined to introduce something akin to the Spider-verse into the plot, because the previous two incarnations of Spiderman, played by Andrew Garfield and Tobey Maguire, have been in discussions to reprise their roles, as have two of the villains: Jamie Foxx as Electro and Alfred Molina as Doctor Octopus.

Plus, Benedict Cumberbatch has joined the cast as Doctor Strange, but is likely to play a small mentor role.

Since Sony ultimately owns Spider-Man’s rights, his role in the MCU is precarious at best. What’s known is that he’ll have this movie, plus another non-starring role in another MCU movie. Beyond that… Who knows?

There are 4 MCU movies scheduled to release before 2021 is finished. Which movie are you looking forward to the most?