After reading RunPee Dan’s amazing retrospective on “The Matrix After 20 Years“, I’m a little intimidated to try and pen my own review. He’s RunPee’s resident Matrix EXPERT. And I don’t say that lightly. Uber. Fan.

I especially get nervous trying to do justice to classic A+ level films. But I do have a few things to say, and here we go…

I’m packing for a move and might add more later. Suffice to say: this movie was a total mind-f#ck when it came out in 1999…and still is. The only really dated aspects are the corded phones and noisy modem (if you’re old enough, you KNOW this sound and it’s still as jarring as it was back then).

If you’re seeing The Matrix for the first time, remember this was the first film to attempt anything like this. At all. It’s a game changer that subsequent dystopian sci-fi films emulated to varying degrees over the years. “Inception“, for one, got it right. And then quite a few missed the boat more or less, like “Looper” which is a decent movie itself, but doesn’t come close to The Matrix.

(Funnily enough, both Inception and Looper featured one of the the same actors).

Why The Matrix is Still so Good

The difference is STYLE. And terrific direction, color palette, intelligent writing, and actors who couldn’t be better suited — both in the casting department, with each actor going balls to the wall in to the new world they had to sell.

Keanu even gets to say “Whoa,” and it doesn’t seem like fan pandering. It IS a WHOA moment.

Not to mention The Matrix sports a fabulous soundtrack, and effects that hold up extremely well. I just rewatched this yesterday to get Peetimes, since The Matrix is enjoying a theater revival. It’s still spectacular in look, feel, and story.

(Little realized fact: Most of the effects were done realistically with real actors in wires, and the 360 degree use of physical cameras to create the “Bullet Time” effect we take for granted now. I’m a huge fan of truly realistic physical effects in a modern age of CGI Everything.) 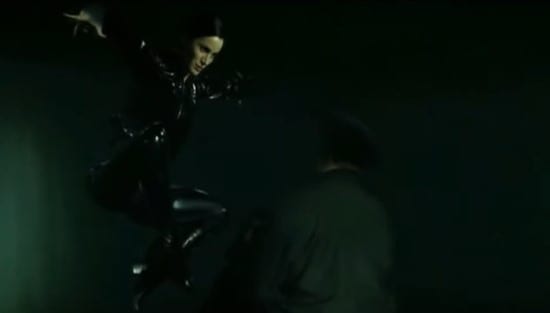 This is how to make a movie. I can only hope the Watchoskis are up to the 2020 fourquel after all this time. Some crucial threads are left unresolved, so I’m fine with bringing the original cast back, dead or alive. (In Sci-Fi, death is relative.)

Deeper than The Usual Sci-Fi Flick

I’m not even going to handle the intense philosophies presented in the Matrix Trilogy — Philosophy professors wrote many books and teach actual courses just on this.

Enough for now. This will get you started. Also, if you hurry, this will be your only time to catch The Matrix on the big screen after two decades, so go get on it. Our three good Peetimes on the RunPee app will help you remember what scenes NOT to miss.

About The Peetimes: We just noticed The Matrix was released on a limited basis, so we added Peetimes now. Keep in mind this is a seriously intense mind-bending movie that you have to pay close attention to. All 3 Peetimes are really good. The last time to go is at 1 hour into the 2 hour film, so make sure to empty your bladder proactively, especially if this is your 1st time watching the film. (Or if it’s been a while.) #TheMatrixHasYou

There are no extra scenes during, or after, the end credits of The Matrix. (What we mean by Anything Extra.)

The Matrix After 20 Years – A Retrospective: A Different Kind of Hero, a New Kind of Science Fiction