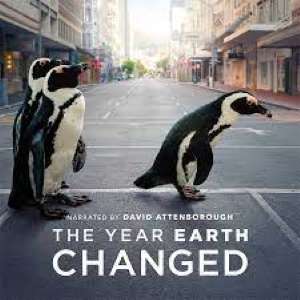 “March 2020. Overnight, our lives are put on pause. But, as we stop, remarkable things start to change in the natural world.”

The Year Earth Changed opens with the venerable tones of David Attenborough, which reassure you this is going to be fascinating, entertaining, and educational three-quarters of an hour. Apple got together with the BBC Natural History Unit to take a look at what happens when the primitive, ape-descended life forms of an utterly insignificant little blue-green planet are made to stay indoors and, generally, stop buggering things up for everything else.


As soon as you see BBC Natural History Unit mentioned you know you are in for a treat of beautifully shot wildlife: the sort of images you tend to see on 8K mega-screen TVs in an electrical retailer’s showroom.

The Other Animals Come Out to Play

The range here, however, includes god shots over deserted cities as well as the usual underwater and undergrowth footage. Interspersed throughout are amateur shots of the unplannable scenes; jackals in a Tel Aviv park, a puma in Santiago going over a garden wall like any domestic cat, and a hippo ambling into a petrol station in South Africa. Perhaps the most thrilling scene is when a fully grown male leopard ambles across the patio of a house where the film crew is staying. The leopard shows supreme nonchalance and confidence as he takes a look around and then wanders off. The cameraman has to remember to start breathing again and wonders how many spare pairs of pants he has left.

How Long Has This Been Going On?

There is an unexpected windfall for researchers. In the shadow of the Golden Gate Bridge are pockets of greenery which are the homes of White-Crowned Sparrows. The researchers are hearing sounds in the bird song they’ve never heard before, as traffic noise has dropped to a level not known since the 1950s.

And it’s not just the noise that’s dropped. Air pollution levels plummeted ridiculously quickly. We are talking about levels dropping by fifty percent within a week to a fortnight. There is a segment with an amateur photographer who lives in Jalandhar, India reporting excitedly about the new sight he can see just twelve days after the lockdown began…the Himalayas!

Now, Jalandhar is over 200 kilometers away, but the Himalayas are the highest mountain range in the world — so you think you’d be able to see something! It turns out that it’s just air pollution blocking the view. And the effects are global; Spain sees its April tourist figures drop from over seven million in 2019 to zero in 2020. Florida beaches usually rammed full of spring breakers are deserted, which is a big help to the sea turtles needing to return to the beaches to lay their eggs. Human disturbance has been blamed for the drop in loggerhead turtle numbers but this is the first year that can actually be checked…successful egg-laying jumped from 40% to 61%.

Everybody’s Got To Learn Sometime

So it’s not too late then? To my mind, it’s more of a worry that the rapid recovery shown in The Year Earth Changed might be more of a Trojan horse. Those people who make the most money tend to be the ones making the most pollution, and they may think that it really doesn’t matter how much rubbish they pump into the air because — if they take a month or two off — everything will sort itself out again. Scenes of animals breeding more successfully, and water and air clearing almost magically, may well lead the titans of industry to adopt an air of complacency.

Once again the marvelous and still sadly missed Douglas Adams seems to have got it right…“Human beings, who are almost unique in having the ability to learn from the experience of others, are also remarkable for their apparent disinclination to do so.”