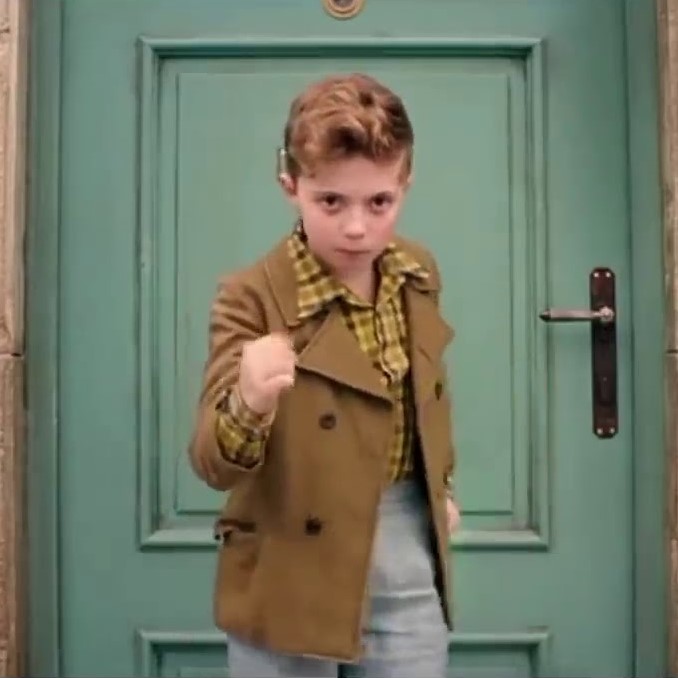 So why do JoJo and Elsa share a silly dance at the end of JoJo Rabbit? What does this even mean?

When JoJo returns home from the movie’s World War II Nazi adventures, he lets Elsa out of his huge empty house, competently — for once — lacing the red leather shoes she’s wearing. It’s symbolic. Tying those red shoes — his mother’s daily shoes of choice — are about JoJo finally leaving behind his childhood. Always coming undone, JoJo “Rabbit” could never manage to tie his mother’s shoes; he couldn’t quite put the “bunny though the hole.” (His Rabbit nickname isn’t about that early animal abuse scene.)

Then Elsa timidly steps out into the street. Local Germans are picking up rubble, starting the long reconstruction process. No words are needed.


It’s a quiet, powerful and underplayed moment. Elsa sees an apparently new world. She doesn’t quite know whether to smile yet — is this real? Then American soldiers rush by on motorbikes, cheering and waving an American flag. Otherwise, all is finally still, with no pounding shell or mortar fire — and no Nazis to be seen.

There’s only three small lines of spoken dialogue in entire scene.  After Elsa slaps JoJo, he says, “I probably deserved that.” And yeah, he definitely did. We understand JoJo now, but lying to her was still a major misstep in the young boy’s journey to compassion.

But he realizes can’t keep Elsa to himself forever. He has to let her go out into the world and become a woman again, instead of a terrified Jewish refugee.

Then JoJo asks, “What we will do now?”

In response, Elsa starts to gently sway. It doesn’t even seem like dancing at first. As the music swells, JoJo joins the increasingly exuberant dancing. The two play off each other triumphantly. The screen cuts to black while David Bowie’s German version of We Can Be Heroes  continues over the credits.

Then there’s this closing quote over the screen:

Let everything happen to you: beauty and terror. Just keep going. No feeling is final.

Why are they dancing at the close of this intense little movie?

Dancing is symbolic of freedom, and of love, in this movie. Rosie says as much early in, in the ‘stair-steps scene’ by the river. JoJo dances several times with his mother Rosie, in at least two memorable scenes.

In the first, Rosie dances on the park steps and talks about how dancing shows God that you love him. JoJo isn’t really paying attention, but the camera lingers on her red shoes.

We see JoJo dancing with his mother (and father, sort of):

Rosie says, “Hey, don’t just sit there. Come, dance with your parents.” It’s sweet. The love JoJo and his mother share is clear. JoJo succumbs still to the magic of childhood. He may be a Nazi youth, but he’s still a ten year old kid.

By why is Elsa dancing now?

You know what? That’s exactly what she does in the last two minutes of film.

Do you have goosebumps yet?

chevron_left 7 Ways to Keep Your Sanity While There Are No New Movies
RunPee Weekly Newsletter 12th edition (June 3rd, 2020) chevron_right