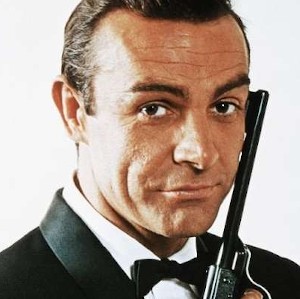 This weekend I had one of those “aww” moments when you get some sad news. Not so sad as to knock you sideways, like the death of a parent or a favourite dog, but sad enough to give you a moment’s pause to think back and reflect. That moment was when I heard that Sir Sean Connery had died.

Elsewhere on this site I wrote a rambling piece about the first film that I ever saw in a cinema. That film was Goldfinger, way back in 1964 and the star was, of course, Sean Connery. A few years later, and I was taken back to the cinema to see him in Thunderball — and, to me anyway, he was synonymous with the role of James Bond while I was growing up.


Of course, later years presented him with a wider variety of roles: a many kings, military personnel from both sides of the iron curtain, a detective monk, an immortal, and a post-apocalyptic survivor — to name but a few. Regardless of his roles, though, he was only ever one person… Sean Connery. His essential personality always shone through, and it didn’t seem to matter that the Russian submarine commander or the samurai sword wielding Spaniard spoke with a lisping Scottish accent.

And now, looking back, it’s not his turn as 007 that I remember him for so much. Don’t get me wrong… he was a good Bond, but not the best; I usually put him at joint second with Pierce Brosnan. But he tends to pop up in a few of my ‘guilty secret’ films. Ramirez in Highlander, Marko Ramius in The Hunt For Red October, and Mac in Entrapment are all films that I’ve watched many times, and still watch a couple of times a year; they’re among the ones which I have to force myself to pass over when I’m feeling lazy and looking for some mindless entertainment.

What is undeniable is that Sean Connery had a presence. In a cinematic world where smaller actors are preferred, because they are easier to frame when they are around the average height, Connery was 6’2”. He was muscular and comfortable in his own skin; comfortable enough to work as a life model before turning to acting. He also had a poise and grace about that was almost feline. Albert “Cubby” Broccoli gave him the lead in the first Bond film, Dr. No, because he thought that he “moved like a panther’.

I’m never sure whether this meant smooth, rippling muscles or scratching the furniture, but I’m guessing the former.

His early life is a matter of record… Royal Navy, milkman, coffin polisher, plasterer, lorry driver, laborer, model, and bodybuilder are just some of the jobs he had before going into acting. He’s won all manner of awards; an Oscar, a BAFTA fellowship, a knighthood, third place in the 1950 Mr. Universe, 14th in Empire (UK) Magazine’s Top 100 movie stars of all time, as well as their number seven of the 100 Sexiest Stars in Film History. Also on the record is his support of the SNP (Scottish Nationalist Party)– and his alleged position as a tax exile — but politics and excise habits are discussions for another place.

Missed opportunities: Shocking Sean Connery roles that could have been

The biggest thing is that he’s primarily renowned for being Sean Connery in lots of different films, but there could have been more… many more. While he’s famous for passing up a reputedly half a billion dollar pay cheque by not taking the role of Gandalf in Peter Jackson’s Lord Of The Rings trilogy, there are other roles he didn’t take; sometimes deliberately, sometimes due to scheduling conflicts.

An example of the latter is Star Trek V: The Final Frontier. The role of Sybok was written for Connery (the mythical “heaven” Sha Ka Ree is based on Sean Connery — say it out loud) but he was tied up with Indiana Jones and the Last Crusade.

Throw into the mix the following roles… Rod Taylor – The Birds, Jeremy Irons – Die Hard: With A Vengeance, Omar Sharif – Funny Girl, Richard Gere – Pretty Woman, Steve McQueen – The Thomas Crown Affair, and, for me the hardest to swallow, Gene Hackman in Runaway Jury. All of these might have been played by Sir Sean.

Also rejected for whatever reasons include Alexander, Dressed To Kill, Shogun, Amistad, Instinct, Assassins, From Hell, The English Patient… the face of cinema could have been very different. Even more different than it became during his cinematic working life, which ran from 1954 to his retirement in 2006.

Yes, I remember him as Bond, but I also remember him from school and college film clubs, when I saw him in Zardoz and Shalako. I remember his turns in Highlander, Indiana Jones and the Last Crusade, Finding Forrester, The Rock, and The Name Of The Rose. I even turned a bit of a blind eye to The League of Extraordinary Gentlemen and The Avengers; calm down youngster –I mean the one based on a UK TV show, rather than a US comic book.

Whenever he appeared he may always have been Sean Connery, but he was always good value.