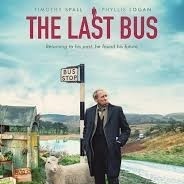 So… a matter of weeks after writing an article about Timothy Spall, I get an email inviting me to preview a screening of his latest film The Last Bus. Yes, we at RunPee Towers have THAT much clout! I say it’s his latest film, but it’s still in post-production and not due for release until 2021, possibly 2022. I have to say that it’s a very British film and might not get a very big release across the Atlantic.

How British is very British?

Well, the opening few minutes use something desperately British and unchanging to show the passage of time from the early fifties up to (about) the present day… the Shipping Forecast. Malin: Southwest 4 or 5. Slight or moderate. Mainly fair. Good. That might mean nothing to people without saltwater running through their veins, but it evokes something warm and comforting to us land lubbers listening to Radio 4 at 00:48 or 05:20… or 12:01 and 17:54 on Long Wave!


The Last Bus tells the story of Tom Harper

Recently widowed, he makes a pilgrimage from John O’Groats to Land’s End using only public transport funded by his OAP’s bus pass. Interestingly enough, Land’s End to John O’Groats is the longest distance between two points on the British mainland, but those two places are neither the furthest North or South nor, indeed, East or West on the mainland. Anybody desperate to know which places are can get in touch!

During the course of his journey, he interacts with quite a few people. While we know the story starts in the 1950’s, it isn’t specified how up to date is the endpoint. However, it must be reasonably current, as Tom starts trending on social media and is a minor celebrity by the time he makes it to the South West. So Tim Spall, who is my age give or take a week, is playing someone who would be nearer my father’s age — but the man is a chameleon and manages it effortlessly.

Having said that, the non-linear narrative means that we see relative newcomer Ben Ewing as the young Tom, but Tim Spall as the middle and old aged version. So it bounces back and forth through time, explaining why they were living in the far North East of Scotland, why Tom has to get back to the far South West, and why time is so crucial. It might sound convoluted, but it’s an easy follow while still having a few twists; my wife claims she saw most of them coming, but still shed a few tears along the way.

It does trigger the emotions quite nicely. There are times when you are worried for Tom’s safety when he’s plunged into a big city in the middle of the night; you feel relieved when a good samaritan helps out; you have a laugh when a pompous git gets his comeuppance, and feel a sense of pride when old Tom stands up to a drunk young man who is harassing a Muslim woman on one of the many buses.

Having said that, there might be people who will find The Last Bus a bit raw if they’ve suffered the same or similar bereavements or bad news; I still can’t re-watch Terms Of Endearment and could barely get through the trailer for Ordinary Love.

So, for me, it gets the now customary A because of Tim Spall, but there is an argument for putting it in the B category for the overuse of so many tropes. Let’s settle for an A-.

Back To the Movies We Go: Once more unto the breach!