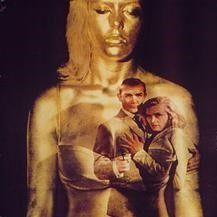 So what do Pierce Brosnan and I have in common?

Both voted “Sexiest Man Alive” by People Magazine in 2001? Both about 6’2”? Both have had a license to kill?

Only one of those three is correct but there is something else that we have in common… the first film we saw in the cinema was “Goldfinger.”  I can’t say much about Pierce’s experience, but I can tell you a bit about mine.


It’s October 1964, and my father decides he’d like to take a trip to the cinema for his birthday. My mother is notorious for not managing to stay awake during a film, so he decides to take me, his 7½ year old son, to see the film that was currently breaking records; the latest in the burgeoning James Bond franchise, “Goldfinger.”

Goldfinger recouped the spend on it within two weeks of release and went into the Guinness Book of World Records as the fastest grossing film of all time.

Even at that age and back in those days I was aware of the film before we went to see it; advance publicity was nowhere near as advanced then as it is now. I knew about the Aston Martin DB5, I knew about the laser beam scene, and I knew about Oddjob and his dodgy hat.

I remember saving up for ages to get the Corgi model of the car, but they were as rare as rocking horse droppings. I used to walk across the estate we lived on to a toy shop everyday for months asking if they had one in, but they never did. I remember the bitter jealousy I felt of the friend of mine that had one; he let me look at it and activate the gadgets, but he never let me look at the ‘top secret’ instruction sheet that came with it!

It wasn’t the first film I’d seen, but everything prior to this had been in black & white, blurry, and on a screen about the size of my computer, with sound coming out of a speaker that could have been taken from a transistor radio.

Nowadays colour is taken for granted, definition is high, and, even at home, screens are quite big with hi-fidelity sound bars attached, but now, as back then, the cinema experience is what makes the difference. An image so big that it can fill your peripheral vision, colour so intense it reminds you of those brilliant summer days of childhood, and the sound… it is, for me, the sound that makes the big difference. Not only is it loud — way louder than your neighbours would put up with if you could get it that loud at home — but it is clear, crisp and you can actually feel it. My cinema going-companion is my profoundly deaf son, and he will happily go and enjoy anything regardless of subtitles being there or not.

And this was my first time in a cinema

All the bright lights, action, explosions… it was an incredible introduction to the media.  I was blown away. Totally absorbed and hooked. I remember to this day the feeling as I walked out. I was 007… I pulled up the collar of my mac and gave a diamond hard stare at anyone who crossed my path. Imagine Humphrey Bogart but in shorts, sandals, and having to hold his dad’s hand when he crossed the road.

And so began the longest lasting relationship of my life. Since that time, I estimate that I have seen a film in the cinema over 5,000 times; might not sound much but that’s more than twice a week and could actually be higher. Back in the seventies you could buy a ticket to get in to a screen and sit there all day; when “Superman” came out in 1978 I went to the cinema and watched it from mid morning until the evening. As a child, we went to Butlin’s holiday camps and the thing that I loved was that there was a free cinema you could go to as and when you wanted to.

Nowadays I can’t allow myself to live on a diet of popcorn, hot dogs, and sweeties, so I tend to only go once in a day… unless, of course, there’s a couple of screenings that line up nicely!

Fortunately retirement and a Light Cinema Infinity Card means I can go as often as I want. At least that was the situation before Covid-19 hit the world between the eyes. I still watch a film every day, but don’t actually watch broadcast TV any more — I just rely on stuff downloaded and played through my Apple TV box… the majority of which is, surprise surprise, movies.

I re-watched “Goldfinger” while I’ve been thinking about this article and, as with so many films when they’re re-watched after a long period of time, there are mistakes and things that never dawned on me before. When Bond takes out Tilly Masterson’s car with the tyre shredder, she notices that both tyres are punctured, but not that the metal around the top of the sills or the bottom of the doors are punctured as well.

Was that one-piece flannel thing that Bond wears when he goes up to Goldfinger’s suite and interrupts his cheating at cards really supposed to be sexy?

While they might be able to crush a limo down to the size of a tea chest, would a little pick up truck be able to drive off with it in the back, given there’s dead mafiosi and a million dollars worth of gold inside it, adding to the weight?

The iconic image from that film is that of a naked Shirley Eaton as Jill Masterson painted gold, but her actual screen time is tiny; Margaret Nolan (Dink) is onscreen longer when you factor in that she is the body that gets projected onto for the credits sequence.

But then nostalgia kicks in, and it’s a case of forgive, forget, and enjoy.

Thank you “Goldfinger” and Dad for getting me hooked on cinema. Admittedly the next film he took me to was “Carry On Spying” — but it was too late by then!

Rumors: will Tom Hardy be the next Bond?