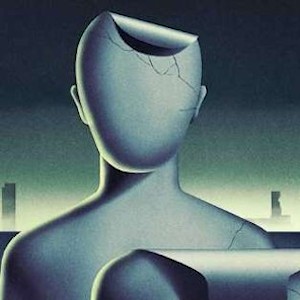 Undergods was a surprise to me. I wasn’t a hundred percent sure what it was going to be about but, given it’s described as “an otherworldly journey through a Europe in decline”, I wasn’t expecting a lot of laughs.

It turns out that Undergods is quite bleak but not relentlessly so, despite the fact that the linking element is two guys (K and Z – Johann Myers and Géza Röhrig) driving around in a battered lorry collecting dead bodies for, if they’re fresh enough, meat. They are drinking something that seems to be in a paint thinner can and, probably, is exactly that.


Throw in that the action mainly takes place in what looks like a derelict, deserted city, and you’d be right in assuming that Undergods is not even quite bleak but very, very bleak…showing a Europe that is not only in decline but actually flatlining.

Serbia and Estonia provide the settings from the rundown cityscapes to the gorgeous house that Tim (Burn Gorman) lives in.  Here we have a film set in a desolate, failed cityscape populated by people who are, in the main, struggling on the edge of death and their stories of an earlier time.  But that doesn’t mean we can’t have some fun as well! Maybe ‘fun’ is pushing it a bit, but Undergods is definitely a source of amusement.

Undergods is an anthology film; there’s usually a theme, person, or even an emotion running through and linking the individual stories. Some recent ones (please bear in mind that, at my age, anything post Indiana Jones And The Last Crusade feels recent) which I’ve enjoyed are Four Rooms, Relatos Salvajes (Wild Tales), and The Ballad Of Buster Scruggs.

On the plus side, an anthology film allows shorter, punchier stories to be told. Haven’t got enough material to make three or four full length films? Have you thought of making an anthology film? People won’t get bored if there’s a draggy middle section, because we’ll get rid of it. Shorter sections mean we can get more cast if we want. Also it means that they have less script to learn and that might keep production times down.

The big downside of anthology films, from my point of view, is that with a standard, single story film there is only one ending, and you can usually give a quite detailed description of the first quarter hour without giving too much away.

When you have a ninety minute film that has three or four interlinked but discrete themes, then you don’t have that luxury without having a spoiler warning every other sentence. I’ll just say that the linking theme is appropriately dark, but the journeys to the various endings are, in all cases, original and entertaining.

Show Me The Talent!

Unusually for the films I tend to get for review, Undergods has mountains of famous faces and they have some very impressive résumés.

For instance, how does Game Of Thrones, Torchwood, Enola Holmes, The Dark Knight Rises, and both Pacific Rims sound? And that’s just Burn Gorman! We’ve still to mention parts in Rogue One, Darkest Hour, Good Omens, Peaky Blinders, In Bruges, Anna, Emma, How To Build A Girl, Prometheus, Filth, Doctor Who, Pennyworth, Hot Fuzz, Sherlock, and some Harry Potters, and those are all named roles (James Potter, Lucius Fox, Duke of Hell Hastur, Lysa Arryn, among others), not just face in the crowd parts.

So, writer/director Chino Moyo has managed to rustle up a startling array of on screen talent and they all perform as well as you’d expect.

Are they well served by the behind the camera team? In the main, yes!  The visuals are well executed and use an appropriately dystopian blue/green/grey palette which does a great job of setting the mood. This all helped along by the music by Wojciech Golczewski; imagine a soundtrack composed by the offspring of a genetic experiment involving the talents of Vangelis, Giorgio Moroder, and Jean-Michel Jarre, and you might get an idea what it sounds like.

Then there’s the actual stories…

An all around, entertaining piece of cinema.