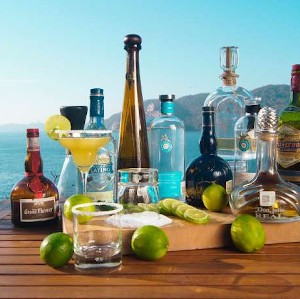 Our RunPee British correspondent never had a margarita. At least not yet. I’m helping him fix this massive oversight, but he probably won’t like them: margs — and tequila — might be an acquired Mexican taste. Or rather, a part of Americana that’s been borrowed from our neighbors South of the Border. Still, if you’re all set to watch a themed beverage for Cinco de Mayo, margaritas best fit the bill.


Fresh ingredients make it better than a sugary powdered mix, if you ask me. It’s worth experimenting to concoct your own poison, based on a few simple ingredients. (Like being a scientist in a lab, if the scientists were trying to catch a buzz.)

Wasting Away in Margaritaville, a la RunPee Jilly

Bonus Points: Make a small bowl of lime quarters for extra squeezings and to look festive. A bright bowl, if you can, in primary colors. Put out a bowl of whole black olives, or chips & salsa.

Make It Extra: Serve under palm trees by the ocean. Or at least to the strains of a Mariachi Band. Even if the band on YouTube stylings come from Disneyland (just to complete the cultural appropriation theme of this post).

PS: Micheladas are an acceptable substitute for RunPee Margs. I’ll work on a RunPee version full of fresh ingredients next.

(Note: links go to our reviews; eventually we will rewatch and add all the reviews here. My favorite is The Milagro Beanfield War.)

The Book of Life

The Night of the Iguana

The Wall of Mexico

Q: I’ve got the remains of a bottle of tequila somewhere. It’s got a worm in it so I’m not sure where that puts it on the quality scale!

Is there an alternative to the salt? I don’t do salt; I don’t cook with it or sprinkle it anywhere! My father had some sort of cardiac problem when I was very young and my mother, being the woman she was, stopped using salt and now I can really taste it.

A: If there is a worm, it’s not tequila. It’s a super charged form called mezcal. It’s the difference between coffee and espresso. Eating the worm gives you extra macho points. Add more honey/sugar to cut the bitterness. Don’t skimp on the lime juice.

Minus the salt, try using a sugar/paprika rim? Or skip the rim. Try using a few drops of hot sauce to marry the sweet/sour/bitter tastes together by dropping hot sauce (lightly) onto your lime wedges and then sucking them after each sip. You’ll have to experiment to see what you like. At least this is not a bad way to make science!