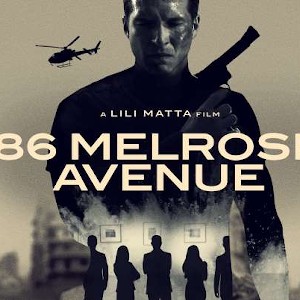 86 Melrose Avenue starts with a bloody and battered Travis (Dade Elza) staggering down a street while sirens are blaring in the background and red & blue lights are flashing. Desperate for somewhere to hide, he stumbles across one of the few places that are open, the eponymous 86 Melrose Avenue, where he pulls out his gun and orders everyone on the ground.

We then cut to a title card, which is followed by a scene which, in another film, might have been flagged up with a “One Hour Earlier…” card. Maybe it’s thanks to years of Nolanesque exposure to the big ball of wibbly-wobbly, timey-wimey stuff that such a card isn’t necessary, and it’s pretty obvious what’s going on.


So the step back in time provides an opportunity to introduce us to the dramatis personæ. They’re split into two groups; the clientele of the gallery who’re soon to become the hostages, and Travis’s wife, Madeline (Kambra Potter) and her friend from out of town, Dallas (Jake Red).

There are a few scenes which tell us the back stories of some of the characters. These are quite nicely done and manage to avoid the overly heavy handed way that this sort of thing is sometimes. Other scenes are slotted in later on to give the remaining characters some context, none of which seem too out of place. First glance and I thought I was going to be going down the “how am I meant to sympathise with these people” route but, apart from one or two, I ended up liking them.

Talent All Over The Place

86 Melrose Avenue has quite a range of experience on show.  For instance, writer/director/producer Lili Matta has just four titles to her name while one of the detectives who pops up at the end is none other than Garry/Jerry Gergich from Parks And Recreation – Jim O’Heir.  Other previous appearances include Once Upon A Time… In Hollywood, Westworld, A Call To Spy, House, and Ant-Man And The Wasp.

Some of the cast are involved to various degrees, in front of and behind the camera, with the upcoming, live-action, Scooby-Doo reworking Mystery Incorporated which I will be looking out for. But, to be honest, I’ve had a geek-crush on Velma since the early seventies. Throw in a next generation Fishburne (Langston), and you can see there’s a substantial pool of talent and experience to be drawn from.

Maybe it’s because I had the chance to chat with film composer Chris Thomas, but I was also keeping an ear open for the music during 86 Melrose Avenue, and I have to admit Robert Revell did a grand job.

Mind you, he has had experience working on Gotham, Nikita, and Freddy vs Jason amongst others, so it’s not surprising. The score ranges from moody piano parts that reminded me of a darker Yann Tiersen, to rousing orchestral pieces to highlight the action scenes.

So Everything’s Perfect Then?

To be honest, no. However, the things that were wrong were relatively minor. For instance, during a battle flashback there is a shot of a soldier throwing a grenade that still has the pin in it.  No wonder Travis has PTSD if his comrades were throwing munitions to the enemy!

Another minor niggle was that the main set is a gallery run by two gay men during the opening of an exhibition for a new artist… I’m sorry, but they must be the only gay men in the entire world who think that a buffet consists of crisps, nuts, and popcorn, washed down with lager or coke in plastic tumblers. Admittedly the sparkling wine is being served in real glasses  — but they don’t even match!

So those are minor niggles.

The first could just be a result of editing, or there may have been a wee bit of exposition needed, but Travis runs off into the night and arrives at the gallery by chance.  During his attempts to subdue the hostage he fires his gun. From that point to the arrival of a van load of heavily armed and armoured police, the road being sealed off, and the negotiator phoning…is about four minutes.

Admittedly, there is a minute for a background flashback in there, but even Travis comments on how quickly they got there!

The second is a bit harder to explain away…it is the argument that kicks off the whole thing. First, I found it hard to believe Dallas was so incapable of reading a room! He kept pushing his opinion on Travis, despite him making it clear he didn’t want to go down that path. No wonder that it leads to the fight that is partly shown in the trailer.

86 Melrose Avenue ends with a card that says, “Every day in America, 100 people are killed and hundreds are injured as a result of gun violence.”

I thought I’d take a look and see how accurate those figures are and, sadly, they are quite accurate. Just for comparison, there were 32 in the UK — but that was for the whole of 2019. So at the end you realise that this was less of a siege film, but more of an examination of the effects guns have on this randomly assembled group of people and how their lives are affected.

Well worth a look if you get the chance.

Movie Review – Ant-Man and the Wasp