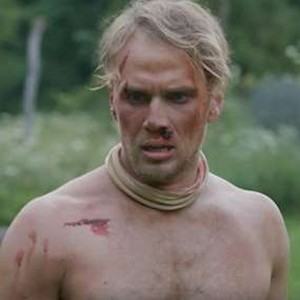 I don’t know if it was meant to be intentional misdirection or a case of “let’s make this kind of open ended and see where we go,” but Bad Witch starts in a very dark place.

The opening scene is of an unconscious man being dragged through a wood and then cutting to another/the same guy tied to a pole and gagged in a cellar; we aren’t given enough information to work out if the dragged guy and the bound guy are the same guy. He comes to and and starts to struggle, as another man is circling him, lighting a candle, and muttering some sort of incantation.


Now I’ve been on both sides of a bit of hot wax play and know it can be a bit painful but not as bad as the tied up guy would have you believe, given the way he’s struggling.

Next we cut to a young boy waking up. He wanders through the house looking for his father. He looks to be early teens and is exceptionally sanguine when he finds his father in the cellar. Why sanguine? Have you ever dropped a chicken wing through the grill of a barbeque and forgotten about it for a couple of hours? Well, that chicken wing is what daddy looks like at the moment.

So… a little gasp, and he’s relaxed enough to notice a book in Dad’s lap. He has a look and it’s full of spells which are conveniently written out phonetically. Cut to the title card.

Bad Witch then jumps forward twenty years to find our young orphaned book finder all grown up and in bed with a woman. It turns out he’s called Xander Perkins (Chris Kozlowski) and uses his magic powers to get women into bed, exact petty revenges, and save himself having to work for a living.

Then, for reasons other than that which we are privy to, Xander is beaten up by a group of witch hunters who leave him with “W I T C H” carved into his chest. As a result, he decides to give up witching and goes to stay with a friend, Henry Hunter (James Hennigan), who will make sure he doesn’t practice his dark arts, helped along by a few more nightmares.

And it’s round about now that Bad Witch either loses direction or gets into its stride, depending on your viewpoint as the comedy starts to ramp up.

Because Xander can no longer just magic up money he has to get a job, and ends up washing dishes at a diner which is frequented by a group of high school kids who all seem to be in their mid twenties.  One of them is Roland Grimm (Jackson Trent) who is an archetypal underdog; mother’s left, father’s fed up about it, and, thanks to being nerdy and bespectacled, is bullied by some sporty types.

Xander befriends Roland and helps him out by teaching him how to be a witch… something he evidently refused to do for Henry. Given Xander is in his thirties, how he finds the patience to put up with the company of kids supposedly, at least, half his age is beyond me… magic?

And They All Lived Happily Ever After?

Obviously, the dread curse of spoilerdom prevents me from saying too much about how things turn out, but I will say that the comedic elements didn’t last until the end and, as a result, I was a wee bit disappointed. Things all seemed to be heading one way, turned in another direction, and ended in a bad place.

I’m sorry, but it’s not the ending I would have gone, for which is a shame as it was trundling along quite nicely up until then. Still there were a fair few gags along the way, the majority of the acting was good, the effects were well handled, and everything looked and sounded good.

One thing that may have helped was the competence of Chris Kozlowski in only his second film, and he carries it off superbly. Now it might just be me, but things might have been helped along by the fact that Mr Kozlowski has more than a passing resemblance to the grown up Tom Felton. Yes… Draco Malfoy! So, would it have been better as a 100% horror or 100% comedy?

That’s hard to tell but, I’ll be honest, it very nearly works. Give it a watch and see what you think.