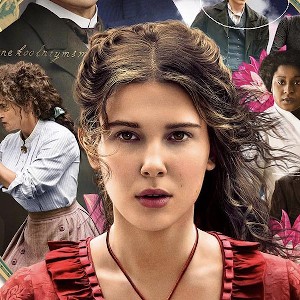 When you have an idea as original as Sherlock Holmes you expect it to get milked for all it’s worth and, unsurprisingly, that’s what’s happened. The Guinness Book of Records has listed Holmes as the most portrayed literary human character in film and television history, with more than 75 actors playing the part in over 250 productions.

Holmes has been portrayed from being a teenager up to retirement age — with his legendary mental acuity in decline. He’s been shown from the period of his creation up to the modern day, and adaptations have been made in Germany, Italy, Russia, and Japan, as well as in the UK and USA.

So what’s left? How about inventing a smarter younger sister… and there we have Enola Holmes.

So now we are in the Holmes’ family home, which does sound odd when you read it out loud, but not too bad written down. Mycroft and Sherlock have left home and are making their separate ways in the world, as a senior civil servant and consulting detective respectively. Father had died long ago, as was quite common in the Victorian era, leaving Enola and her mother, Eudoria.


Both these women are ahead of the times, learning to be free-wheeling, strong-willed, and boundary-pushing. They are skilled in martial arts, cryptography, and logical analysis. On her sixteenth birthday, Enola wakes up to find herself alone — and there starts the adventure.

And quite an adventure it is. Obviously spoilers limit the amount I can say, but there are fights, falls, and steam trains. The big baddie is Burn Gorman who is delightfully sinister, but somehow not as bad as Sam Claflin’s Mycroft Holmes; it did beg the question that if Eudoria spent so long turning Enola into a liberated, self supporting, independent woman, then why couldn’t she knock some of the chauvinistic edges off Mycroft?

Helena Bonham Carter, Frances de la Tour, and Henry Cavill all give good value for the money as usual, while Millie Bobby Brown as Enola Holmes was great fun to watch and she played the part with gusto… but perhaps repeatedly asking men to give her their clothes for £5 might seem a bit much.

All in though this was a good first episode in what I should imagine is going to be a new franchise for Netflix.