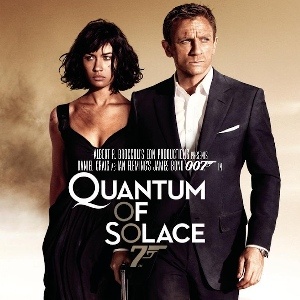 I think it’s fair to say that Quantum Of Solace came in for a fair bit of stick. To be brutally frank it started getting stick before it had even been seen. The cat started peeping out of the bag in September 2007 as people noticed that Sony had registered the domain name quantumofsolacemovie.com. When the title was announced there were whole seas of blank expressions and people mouthing “what the flipping heck does that mean”… or similar. There then followed hours of quasi-philosophical burbling about Bond seeking revenge, redemption, retribution, and any number of alliterative characteristics you can think of. Personally, I’d have just said “it’s the title of one of Fleming’s short stories and we think it’s cool and mysterious” and left it at that. Seeing as how they’d used an even more ridiculous Fleming title in the past, I think Quantum Of Solace is a breath of fresh air and sophistication and am just waiting for The Hildebrand Rarity to get made.


Octopussy had proved that a stupid name wasn’t the kiss of death to the franchise so being called Quantum Of Solace wouldn’t matter in the greater scheme of things. What was a bigger concern was the Writers Guild strike that ran from 5th November 2007 to 12th February 2008. Apparently, scriptwriter Paul Haggis had finished his final draft just two hours before the strike started. Unfortunately in the world of mega-budget films, a writer’s final draft will undergo any number of emendations, alterations, and enhancements before the cameras even start to roll but they couldn’t be done by members of the Writer’s Guild of America. So, left with what they considered to be the “bare bones” of a screenplay, Daniel Craig and director Marc Forster ended up finishing the script, pretty much, on the fly. Apparently, they did enough work on it to make them eligible for co-writer credits but chose to leave their names off rather than going all Alan Smithee about it later on.

They Say You’re Judged By The Strength Of Your Enemies

Once again, after Tomorrow Never Dies, we have another Bond film being written almost as it’s being shot. Despite being involved with the rewriting process, it was chaotic enough for Daniel Craig to say that he’d never do another film “without a script nailed down”. The upshot of all this palaver was a couple of things; Quantum Of Solace was, uniquely in the franchise, a direct sequel to the previous outing, Casino Royale, and it also became the shortest Bond film to date. It is, undeniably, Daniel Craig’s weakest outing but that’s not to say it’s the weakest Bond or, even, a bad film. It is a bit confusing at times and does seem a bit light in the story area… the bad guy’s after oil or water or money or power. Probably a combination of all those. So is it that bad? Being a bit of a geek I spent a bit of time with one of my favourite apps… a spreadsheet and went through Quantum Of Solace‘s IMDb figures.

In second place is Sean Connery with 7.0/10 but that does include Never Say Never Again, take that away and he goes up to 7.1/10. Timothy Dalton and George Lazenby both have 6.7/10 while Pierce Brosnan and Roger Moore both score 6.6/10.

For the sake of completeness David Niven rolled into last place with, in my opinion, a desperately unwarranted 5.1/10; my feelings say that the film let him down rather than vice versa.

The Villains And The Heroes Get All Mixed Up

There are differences with previous incarnations. There are, again, no appearances by Q or Miss Moneypenny. He doesn’t say “the name’s Bond, James Bond”. Neither does he order a “vodka martini, shaken not stirred” but he does drink six of the Vesper cocktails he invented in Casino Royale. After necking all those he does, unsurprisingly, appear to be drunk for the only time in the history of the franchise. Another break with “tradition” is that he doesn’t end up in bed with the leading lady, Camille Montes (Olga Kurylenko); they share a chaste kiss but nothing more. He does bed Gemma Arterton’s MI6 agent Strawberry Fields but, going against the tradition of daft names, she is only referred to as “Fields” throughout the film and the “Strawberry” bit only occurs in the closing credits. In a nod to an earlier incarnation, Fields ends up as a copy of Jill Masterson but substitutes crude oil for gold paint.

While we’re making changes, let’s point out the following… The barrel walk occurs but at the end. The titles do have a smattering of naked women in them but nowhere near the usual amount, there’s more Daniel Craig than topless totty. There are more chases than before; on foot, by boat, in cars, and between aeroplanes. For the first time ever the theme song is a duet, Another Way To Die performed by Jack White and Alicia Keys. This is the first direct sequel to a previous film, literally starting after Bond Shot Mr White and is driving away. This is the only time Bond isn’t captured by the bad guys nor does he fire a silenced gun.

So how does Quantum Of Solace stack up? For me, it was not that bad. OK, it was a bit light on content, but that just meant there was much more time for action scenes. And, trust me, there was a lot of action! The whole thing starts with the maddest, wildest car chase outside of the Fast & Furious franchise. It’s deceptive though because it starts off like a travelogue; a swooping shot across Lake Garda accompanied by heavy, brooding music. Quick cuts to close-ups of car body parts; all shiny paintwork and shinier chrome. Then we’re back to the stunning shots of the Strada Regionale 249. To call this a road is woefully inadequate; it is an architectural and civil engineering masterpiece which manages to get a road hovering over the lake and almost hidden by the mountain above it. More flicking between car parts and swooping across the lake. Hang on… were those bullets? Then we get to within mere metres of the road, the music hits a crescendo and stops to be replaced by car engines, automatic fire, and screeching tyres.

The action barely stops from then on; within fifteen minutes there is a chase across the historic tiled rooftops of Siena. Normally that sort of scene would be recreated in Pinewood but it turned out to be cheaper to shoot on location even after the production team had to remove the existing tiles from the houses and reinforce the roofs so the actors’ feet did not break through the tiles during the stunt. There are speaky bits in between but not that many and not for that long. Perhaps an idea can be gained from the injuries list; facial stitches, a shoulder having to be operated on to screw it back together, the loss of a finger tip… and those were just the ones Daniel Craig sustained! But all that action has to be held together somehow and that’s when we turn to the acting skills of the cast. Obviously Daniel Craig carries Quantum Of Solace but that’s to be expected as he is Bond and in virtually every scene. We also get a lot more of Judi Dench’s M as Marc Forster wanted to explore the Mother/Son relationship between M and Bond; for me, that could have been taken much further. Mathieu Amalric is excellent as the bad guy Dominic Greene being sinister and evil without having to resort to scars, deformities, or even a dodgy haircut. Throw in welcome returns by Jeffrey Wright as Felix Leiter, Giancarlo Giannini as René Mathis, and Jesper Christensen as Mr White and you have a very reliable cast in a well-made action film.

Don’t believe the hype… it’s not as bad as people say!