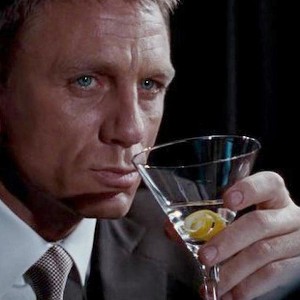 This is one of those articles which, if left unchecked, could have gone on forever. Who knows? There may be more more parts to this than a Fast And Furious franchise. Only time will tell…

A classic White Russian is made with vodka, Kahlúa, and cream. Fill an Old Fashioned glass with ice. Add  2 shots vodka and one shot coffee liqueur and swirl to mix. Pour over the cream and stir gently… delicious! The Dude (Jeff Bridges) liked his White Russians so much he ordered them throughout the entire film The Big Lebowski.

A French 75 is one of the most classic of champagne cocktails. Take one shot of gin, a half shot of freshly squeezed lemon juice, and a half shot of simple syrup (50/50 sugar and water shaken until mixed), and pour them into a cocktail shaker over ice. Shake until well chilled and pour into a champagne flute. Top up with champagne, garnish with a twist of lemon, et voilà! The drink is refreshing and delicious — but it came to fame in Casablanca.

Sweet Vermouth on the Rocks with a Twist: Groundhog Day

Sweet vermouth isn’t typically ordered at a bar unless it’s in a martini and even then, most people like their martinis bone-dry. This drink was made famous by Phil Connors (Bill Murray) in Groundhog Day when he orders the drink and then states, “It always makes me think of Rome, the way the sun hits the buildings in the afternoon”… but, by now, we know it’s Andie MacDowell that he’s trying to get into.

In Some Like It Hot there’s the famous scene in which there is only vermouth and bourbon on the train, and Sugar Kane Kowalczyk (Marilyn Monroe) decides it’s a fantastic idea to make Manhattans. If you want to be a bit more of a show-off you can do it like this… pour two measures of bourbon, one of sweet vermouth, two dashes of Angostura bitters, and one dash of orange bitters into a mixing glass full of ice, and stir until well chilled. Strain into a chilled coupe and garnish with a cherry.

Here we go again with Marilyn Monroe and whisky! When Richard Sherman (Tom Ewell) is talking to Miss Morris (Marguerite Chapman) he states, “Miss Morris, I’m perfectly capable of fixing my own breakfast. As a matter of fact, I had a peanut butter sandwich and two whisky sours.” I remember (vaguely) an end of term staff party which revolved around a blender, several bottles of whisky, a sack of lemons, and a load of ice. Quick recipe… one and a quarter ounces of whisky, one and a half ounces of lemon juice, and three-quarters of an ounce of simple syrup go into a shaker full of ice.  Shake well and strain into a rocks glass with fresh ice, and garnish with a cherry.

The martini, shaken not stirred, was made famous by James Bond years ago, but it was Casino Royale that shot the Vesper to fame. The drink is just a mix of gin and vodka with vermouth, but Bond (Daniel Craig) puts it far better than we ever could when he tells the barman… “Dry martini. Wait… three measures of Gordon’s; one of vodka; half a measure of Kina Lillet. Shake it over ice, and add a thin slice of lemon peel.”

And then, finally, there is the uber-cool, minimalist version that Gary “Eggsy” Unwin (Taron Egerton) orders when a waiter asks if he wants a drink and replies… “Martini. Gin, not vodka, obviously. Stirred for 10 seconds while glancing at an unopened bottle of vermouth.”

Don’t miss your favorite movie moments because you have to pee or need a snack. Use the RunPee app (Androidor iPhone) when you go to the movies. We have Peetimes for all wide release films every week, including Eternals, Dune, Ghostbusters: Afterlife, and coming soon Spiderman: No Way Home. We have literally thousands of Peetimes—from classic movies through today's blockbusters. You can also keep up with movie news and reviews on our blog, or by following us on Twitter @RunPee. If there's a new film out there, we've got your bladder covered.