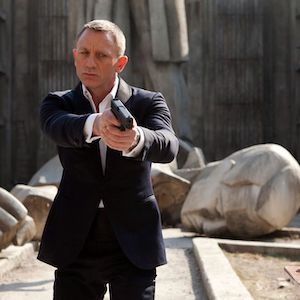 I’m doing this review last of all despite it being my first pick… Skyfall is definitely my favourite Bond film, just edging out Casino Royale. I’ll admit that in this regard I’m at odds with the voters of IMDb.com… they have Casino Royale at 8.0/10 with Skyfall and Goldfinger tying for second on 7.7/10. I haven’t hidden my admiration for Daniel Craig’s Bond; he is my favourite and I’m two minds about the upcoming No Time To Die. I admire that he’s accepting that he’s getting older and is stepping down before it gets embarrassing (unlike Roger Moore who was above the “00” retirement age in his first outing!), but I will miss him. Mind you, I’m still quite looking forward to joining in with the speculation and anticipation surrounding who’s next!

So why is Skyfall my favourite?

Quite simply because, while it’s a cracking action and adventure film, it has so much more going for it. There is drama, emotion, tension, and suspense throughout. The new reboot has settled into its stride with old favourite characters being brought back into the fold and being seamlessly slotted into the narrative. One of the things that makes or breaks a Bond film is the villain — and in disgraced MI6 agent Raoul Silva née Tiago Rodriguez (Javier Bardem) you have an absolute cracker. All right, his plan might seem a little convoluted for a relatively simple aim but he delivers on all the bad guy staples… creepy, cruel, crafty, and cunning.

OK… I’ve nailed my colours to the mast with regards to my thoughts on Skyfall, but what’s it all about?  Let’s try and not be too spoiler-ish by just sticking to what happens in the trailers. Something important has gone and all hell breaks loose chasing after it; Bond and a woman are chasing someone, M is saying how important this thing is, Bond is fighting another guy on top of a train, the woman has the two scrappers on the top of the train in the sights of her gun, M says to “take the bloody shot”, she does… bang! Oops, bugger. Wrong one. Bond plummets off the viaduct and seems to be dead, literally, in the water. Cut to MI6 HQ and M is typing up Bond’s obituary followed by a shot of M and Voldemort with a fake nose talking. Apparently, the missing important thing is a list containing the name, address, and photo of every agent currently undercover in, well, everywhere. Enter Bond back from a short holiday playing dead and holding drinking matches with scorpions… so far, so very You Only Live Twice.

Bond looks older and worn out; my guess is that those scorpions weren’t playing with a straight bat. Unfortunately, MI6 gets blown up and there are rows of coffins draped in Union Flags so Bond decides to come back to active duty rather than sitting behind a desk so has to practice running and shooting things. He’s given a new gun by a new, twelve-year-old, Q. He shoots some more things and goes to the Far East… or Chinatown, it’s hard to tell… where he meets an exotic beauty who warns him about the bad guy who we then get introduced to. Bond is tied up on a chair like he was in Casino Royale but this time he’s dressed so his knackers should be safe. More explosions, car chases, snogging in the shower, trains crashing, people falling off buildings. Oh! The woman who shot him is shaving him with a cutthroat razor so I’m assuming he thinks she has better skillsets with blades than with guns. Yet more explosions, shooting, crashes, and a helicopter then fade to black with Skyfall coming soon. Quite a busy two and a half minutes!

I Did Call You “An Exemplar Of British Fortitude”

One thing that Skyfall capitalises on is the available talent. Let’s face it, in Dame Judi you have one of the greatest acting talents to ever grace a stage or screen so it seems daft to just have her on for a few minutes to give Bond his mission brief and telling him to stop pawing Moneypenny. This time around M is central to Silva’s evil plans; he wants to destroy M because he was captured and she just left him to rot… so far, so very The World Is Not Enough. Bond has always seen M as a mentor, possibly even a mother figure, and will do all he can to save her because, despite everything that everyone else says, she has the utmost trust in him. In this outing alone, La Grande Dame has more screen time than Desmond Llewelyn had in his seventeen appearances as Q.

And talking of talent, Skyfall had four Oscar nominees in the cast: Judi Dench, Javier Bardem, Ralph Fiennes, and Albert Finney. The film itself got nominated for five awards and went on to win two; Best Sound Editing and Best Original Song. This is the point when I start my rant about Adele… I’m sorry but I just don’t get all the fuss about her. OK, she has a reasonable voice but I’d say it was more power than substance. I can’t comment too much on her lyrics but the only ones I recall seemed a bit oxymoronic; she seems to be banging on about some lost love but, surely, if it wasn’t meant to be then move on! Anyway, the Skyfall theme song excited me about as much as I expected to be excited by a dirge.

So Much For My Promising Career In Espionage

So what’s different with Skyfall? What do we get here that we don’t get anywhere else? Well, it’s the first film to be shot entirely digitally. Unfortunately, for me, this falls into the same sort of argument as vinyl vs CD, Châteauneuf-du-Pape vs Asda’s “Something Fruity” red, and Pâté de Foie Gras vs the sort of liver paste you buy by the kilo… I’m prepared to accept that, given the appropriately attuned senses, you can tell them apart and enjoy the difference. Sadly, that’s not me. Other firsts include… first time the villain is successful, first time M shoots a gun, first time that there is no leading Bond girl, first time that the Bond girls are referred to as Bond women, first Bond film to shoot in China, first in the franchise to get five Oscar nominations, first Bond film to win two Oscars, first time that Bond wears a grey suit for the gun barrel walk… I’ll stop there as it feels like I’m clutching at straws.

One minor point I’d like to address is the kerfuffle surrounding the casting of Kincade, The Skyfall estate gamekeeper. On-screen we see Albert Finney in his final film role. The rumours floating around of pre-production were that the role of Kincade was going to be offered to Sean Connery. Part of the charm surrounding the Connery casting myth is the line when Bond asks if Kincade is ready and he replies “I was ready before you were born, son”; Connery played Bond in 1962, Daniel Craig was born in 1968. But that seems a bit of a weak reason to not so much break as totally demolish the fourth wall, also I prefer it when Kincade tells Bond “Try and stop me, you jumped-up little shit!” Apparently, Sam Mendes had one of the Corgi 007 Aston Martin DB5’s as a child (I was desperate for one and spent weeks walking back and forth across the estate every day to see if any new stock had come in with no luck) and says that directing Skyfall was a childhood dream come true… he wouldn’t have spoilt it with a dodgy cameo!