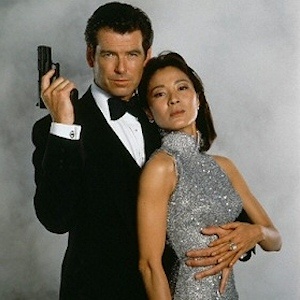 Of all the things that Tomorrow Never Dies has going for it something that, perhaps, doesn’t spring immediately to mind is the sheer weight of originality. This is the first film in the franchise to have no relationship with anything written by Ian Fleming outside of the character names.

Licence To Kill was a virtual pick and mix of elements from Fleming stories and GoldenEye was the name of his house in Jamaica where he wrote the Bond novels. In fact, this is the first Bond film to go the other way… Tomorrow Never Dies was the first Bond film to be turned into a novel following Raymond Benson’s adaptation of the screenplay.

Some other firsts include Elliot Carver being the first and, so far, only Bond villain with a wife. This is the only one of Pierce Brosnan’s Bond outings not to open at no. 1 in the USA. That was due to Titanic opening in the same week. David Arnold made his debut writing the music as there were financial difficulties around bringing John Barry back. Tomorrow Never Dies was the debut for the Walther P99 as a replacement for the Walther PPK introduced in Dr.No; it remained as Bond’s standard weapon until Daniel Craig went back to the PPK in Quantum Of Solace.

Tomorrow Never Dies tells the story of media mogul Elliot Carver (Jonathan Pryce). Not satisfied with just being among the first with a breaking story, Carver decides that he can guarantee grabbing all the scoops if he actually manages to arrange events and be there to record them. It also means that he can have his copy, more or less, written in advance.

Obviously, he isn’t doing this for fun; the prize that Carver has his sights set on is sole access to Chinese broadcasting for the next hundred years. To help with this, he sends one of his henchmen, Henry Gupta (Ricky Jay), to a terrorist car boot sale for weaponry to get hold of a military standard GPS encoder he can use to send Royal Navy ships into enemy territory. Obviously, Carver is there to record events as they happen as well as altering them if they aren’t impressive enough.

What is mildly interesting is how Tomorrow Never Dies shows its age. The concept of GPS has to be explained several times as, back then, it was just a military device rather than being available on every new car and phone. Similarly, the concept of the Stealth ship has to be spelled out to the viewer.  At one point Carver lists off all the assets of his media empire; TV, news, radio, books, magazines… the Internet isn’t mentioned at all. That’s mainly because, back then, the internet wasn’t really a thing that people knew about. Can you believe it, youngster?

It’s Full Of Bugs, Which Means People Will Be Forced To Upgrade For Years

There are reports of cast members being less than happy with their experiences filming Tomorrow Never Dies. As Bond 18 was being written from scratch there were a few people involved but the first to put pen to paper was Bruce Fierstein who had worked on Goldeneye. In the end there were various drafts floating around with Jonathan Pryce and Teri Hatcher signing contracts based on a version of the script that never made it to camera. There were some harsh words exchanged between Pierce Brosnan and Teri Hatcher following her late arrival on set one day. This was very short-lived as it turned out that Ms Hatcher was in the early stages of pregnancy and, consequently, suffering the effects; Pierce apologised unreservedly when he found out.

Perhaps, however, the biggest bone of contention was the script or, more accurately, the tardiness of its arrival; Fierstein had only finished the final draft three weeks before the end of production. The ever radiant Dame Judi Dench is well known as a thorough professional but even she complained to the director, “You know, it was very off-putting indeed to have learnt the script and at a quarter to ten the night before to get a loud knocking on the door by the courier with a new script. That’s not fair.” Fierstein was writing in a tent outside the Bond stage, sending in pages as they were shooting. At one point Pierce Brosnan was standing on the deck of the stealth boat, asking “Which way do I go? Do I turn left or do I turn right?” The answer was, “Wait. We’ll have the pages in a minute”!

The First Rule Of Mass Media, Elliot. Give The People What They Want!

Tomorrow Never Dies did not disappoint as far as I was concerned. To my mind Pierce Brosnan is one of the better Bonds; he has the ruthless efficiency of a double ‘0’ agent when it comes to the action scenes but can pull off the corny one-liners too. I think he pulled off the balance far better than Roger Moore ever managed to. Michelle Yeoh is marvellous as the Chinese Secret Service’s equivalent to 007, Wai Lin. There was just one small problem with her performance… she was too tough for the stunt team! They couldn’t cope with her full-contact style of martial arts action filming and had to call in Jackie Chan’s stunt team which was appropriate given that Ms Yeoh had learnt her full-contact style of martial arts action filming when she worked with, yes, you guessed it… Jackie Chan’s stunt team! She also did nearly all her own stunts; she didn’t do the running up the post scene or the motorbike jump over the helicopter. Also, any scenes on the motorbike that are shot from the back are stunt doubles.

And on the side of evil, we have the superb Jonathan Pryce; actually, I know my editor Jilly is fascinated by this stuff so… Sir Jonathan Pryce. Yes, the High Sparrow has been knighted in the 2021 birthday honours. Others, like myself, have followed Sir Jonathan’s career since the mid-eighties. He was awesome as Sam Lowry in Terry Gilliam’s surreal masterpiece Brazil and has continued to delight TV, cinema, and theatre audiences to this day. Apparently, Anthony Hopkins was originally lined up for the role of Carver and, while I can imagine him pulling it off equally well, I’m relieved he chose to do The Mask Of Zorro instead; I think both films benefitted from the casting being this way round! There were rumours that Elliot Carver was based on media tycoon Rupert Murdoch but that’s ridiculous. You don’t start making up stories based on someone with that much money and a pulse! Judging by the cover story that M puts out, Carver is based on deceased, bankrupt media mogul Robert Maxwell.

All in all, a fun action romp. If you get the chance check out the deleted scenes featuring Ricky Jay’s card throwing skills!

chevron_left Is there anything extra during the end credits of The Addams Family 2?
Movie Review – The Many Saints of Newark chevron_right