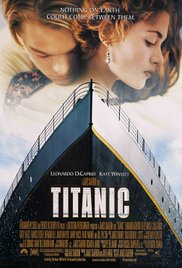 Is there any movie more touching and exciting than Titanic? And the first time you watch it, it’s completely unexpected. I didn’t even want to see this in the theater, and resisted for months. Fool that I am, I figured, “Yeah, it sinks. I know what happens. Why see it?

I was never so glad to be so wrong. The hype was deserved. The small, interpersonal story is so damn good you even forget the ship is going down forever, that thousands of people will die in sub-freezing water for no other reason than White Star Lines’ vanity. Man, I sobbed for the entire final act at my first viewing. Some scenes — like seeing the old couple, terrified, holding each other in bed as the waters rise — still make the tears flow. And I hold my breath as Rose and Jack do on the far stern, when they are sucked into the ocean. (We’ll just call that my 4D interactive experience. I do this in The Abyss too.)

The heart of the story is Rose and Jack: actors DiCaprio and Winslet exhibit charming charisma, chemistry, and commitment to their forbidden inter-class love affair.


The sparkling James Horner soundtrack helps, as well as the indelible visuals of the gigantic, “unsinkable” ship. The big screen viewing’s sense of scale draws you right in. DVDs don’t do it justice.

Bill Paxton’s framing adds the perfect storytelling device, bridging past and present in a poignant way, making the heroes, villains, and tragic deaths more meaningfully real. The old decayed ship on the sea floor morphs into the Ship of Dreams, where the “the china had never been used. The sheets had never been slept in. ” You just get chills. It’s a storytelling triumph: James Cameron went to extraordinary lengths (and expense) to film the actual submerged remains, bringing us to that forbidding, painful, fascinating setting.

A cascade of small mistakes, human hubris, and major design oversights led to over 1500 people dying horribly, unnecessarily, in the far North Pacific on April 15, 1912.

Through the fabulous medium of movies, at their best, you get to feel and care for real history, even if the two main characters here are fictional. I love this movie so much that I now devour any books, movies, or museum exhibits on the Titanic. Yes, I do.

Does this movie need RunPee? Um, do sharks swim? YES. It’s really really really long. Loooooong. So long that it needs two DVDs to play on a home theater. If Titanic came out now, we’d probably have to have four or more Peetimes…a human bladder can only go so long. (But my heart will go on…)