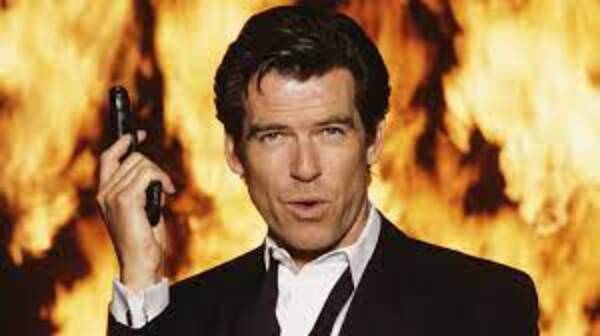 GoldenEye is an important Bond film.  It ended the six-year hiatus since License to Kill, during which Timothy Dalton quit and Alfred R. Broccoli stepped down as producer.  It introduced Pierce Brosnan in his first outing as James Bond.  And it was the basis for an extremely popular video game, one which I have fond memories of playing.  What makes this film so great?  Let’s dive into it.

The Tone of GoldenEye

The opening scene sends the message that Dalton’s darker take on Bond is gone and the series is back to being fun again.


This is driven home further by the car chase, during which Bond trades quips with the psychiatrist evaluating him.  The scene features some of the best dialogue in the series.  So does the gambling scene that follows it.  The dialogue is smooth and flirty without being cheesy.  Until we get to the sex scene with the admiral.

The One Thing That Doesn’t Work In GoldenEye

Famke Janssen plays Xenia Onatopp, a femme fatale whose charms are literally deadly.  As smooth as Janssen is at the baccarat table, in the sex scenes she is over the top (pun intended).  Xenia is a sadist who gets off on hurting/killing people, including her lovers.  She moans as she guns down a room full of people.  She squeals as she crushes an admiral with her legs during sex.  The subtitles read, “He cries in pain, her in pleasure.”  Her scene with Bond is too violent to be sexy.  It ultimately comes off as silly and loud.  Her death is unbelievable, which is fitting for her character.

The Supporting Cast in GoldenEye

The supporting cast in GoldenEye is part of what makes it such a good film.  GoldenEye boasts one of the best Moneypenny scenes as she casually puts Bond in his place, letting him know she doesn’t pine for an international incident every night just to see him, and that his innuendo could be considered sexual harassment.  Best of all, she tells him the penalty is to finally make good on all his big talk. It’s a fun scene with crisp dialogue.

Judi Dench plays M and she is a total badass.  She has cutting lines.  She’s no-nonsense.  And she has the guts to call Bond a “sexist, misogynist dinosaur.”  This is the first time I’ve really fallen in love with the character M.

Desmond Llewelyn, playing Q, is the only returning actor in this outing.  His scene with Bond is goofy fun with extras in the background falling prey to different experiments.

Character actor Joe Don Baker played villain Brad Whitaker in The Living Daylights.  Here he plays CIA agent and ally Jack Wade, a role he reprises in the sequel Tomorrow Never Dies.  Baker provides some of the comic relief in the film.  He refuses to engage in the typical coded spy banter until Bond forces him to.

Robbie Coltrane plays Valentin Zukovsky, an ex-KGB agent who is now a mafia head.  Coltrane is a great character actor and brings a lot of humor to this scene.

The Villain in Goldeneye

General Ourumov (John Gottfried) is one of the big bads.  But the one pulling the strings is former 006, Alec Trevelyan aka Janus (Sean Bean).  Trevelyan is truly one of the best Bond villains.  The graveyard scene where he reveals his true identity contains great dialogue.  He also has a personal connection to Bond that not many of the other villains in the series do.  He was not only a former friend and co-worker of Bond’s, but Bond is the reason his face is scarred.  No longer a believer in crown and country, Trevelyan is the anti-Bond, who is against everything Bond stands for.  He has a good death scene too. [Ed note: Sean Bean always dies. That’s not even a spoiler.]

The Action Scenes in GoldenEye

GoldenEye has some awesome action scenes.  I talk more about the opening scene below.  GoldenEye also has one of the best car chases in the series.  When General Ourumov captures Natalya, Bond goes after them.  In a tank.  It’s fun seeing Bond as the one chasing instead of being chased for once.  Also, it’s just so satisfying watching Bond destroy everything in his path.

This scene was a cool surprise on the rewatch.  While I was looking forward to seeing the opening again, I had somehow forgotten about this scene.  Towards the end, there’s a tense bit where Boris keeps unknowingly activating and deactivating an ink pen with an explosive inside, by clicking it over and over.  The suspense is killer and it has a good payoff.

Opening stunt:  Bond breaks into a chemical weapons facility in the USSR by doing a death-defying bungee jump off a dam.  (This looks very cool on screen.) Bond sets explosives to blow up the gas tanks with the help of 006.  Bond tries to escape in an enemy plane but falls out of the plane after a scuffle with the pilot.  Bond rides a motorcycle off of a cliff, catches up with the pilotless plane on the way down, and manages to pull the plane out of a nosedive at the last minute.  This is the first Bond opening stunt I ever saw and it remains my favorite.  (Dr. No was the first Bond film I ever saw–on VHS!–but the opening doesn’t feature Bond performing a stunt.)

Gadgets:  Car radio that spits out pictures, a missile fired from a leg cast, a BMW with stinger missiles, a belt with 75-foot rappelling cord built into the buckle, a phone booth with an airbag, a tea tray that acts as an x-ray document scanner, a pen with a class 4 grenade inside.

Title theme:  The theme song was written by Bono and The Edge, both from U2, and sung by Tina Turner.  It’s a fun song.  Turner’s voice makes it feel like a tribute to the excellent Shirley Bassey themes.

Connection to a previous film:

The opening scene takes place before the events of License to Kill.  The car chase takes place nine years later.  Bond is most likely being evaluated to see if he’s fit for duty after going rogue and killing Sanchez.

The following dialogue between Bond and the villain feels like a call back to Goldfinger’s “No, Mr. Bond.  I expect you to die.”

Bond:  “Am I supposed to feel sorry for you?”

Connection to a future film:

We find out Bond was an orphan whose parents died in a climbing accident.  We learn more about what happened to Bond after that and who raised him in Skyfall.

GoldenEye injected new life into the series.  It has good pacing.  It has so many great moments.  Like when Natalya says to Bond, “Do you destroy every vehicle you get into?”  That’s just one example of how strong the dialogue is here.  Everyone brings their ‘A’ game.  Even Famke Janssen commits to her cartoonish character.  Rewatching this has cemented it as one of my favorites and one of the Bonds with the most replay value.

Note: the preview is a little SPOILER-y.  Don’t watch if you want to go into the film fresh.