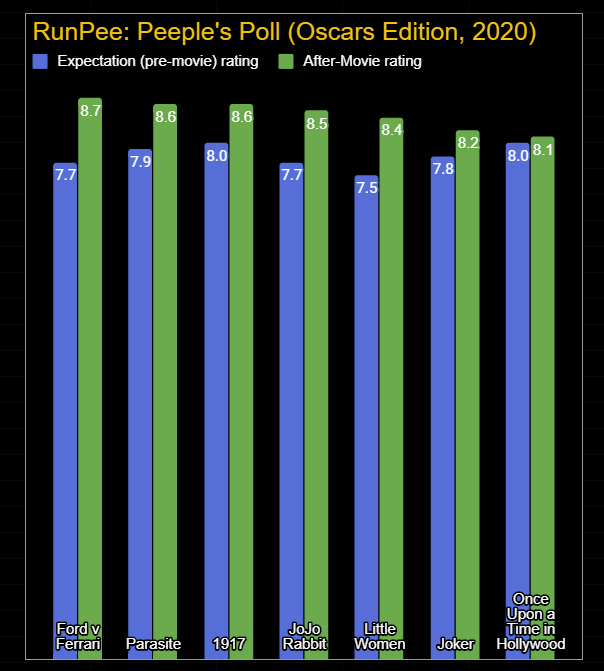 The 2020 Academy Awards ceremony was last night and the winners are in. To start, let’s take a look at how all the nominations for Best Picture did in the RunPee Peeple’s Poll.

According to the Peeple’s Poll, Ford v Ferrari was the best movie of 2019, narrowly beating out Parasite and 1917, both tied for 2nd place.

If you’re wondering, the real winner of the RunPee Peeple’s Poll for 2019 was Avengers: Endgame, which ended up with an astonishingly high 9.2 rating. Endgame was that good; the finale we all hoped for after 10 years of Marvel storytelling. But, what do the Peeple know? Obviously, the Academy Award Members are the the best judges of what constitutes a great movie. ;-(

Oh well. Superhero movies don’t usually do well at the Awards. Joker won a few categories because it was essentially an intense drama, with almost no “super” in it. So OF COURSE the Academy loved it.

You can see from the table above that not only was #FvF the top rated movie of the bunch, but it also beat expectations by the widest margin. Once Upon a Time in Hollywood just barely beat out expectations, but there’s no shame in that. Tarantino has built a reputation that’s hard to live up to.

Other Oscar wins and snubs

Bummer that Peanut Butter Falcon didn’t win anything at all… It was nominated once, for Shia LaBeouf  for Best Supporting Actor. PB Falcon was simply outstanding and deserves all the praise in the world. But since no one (spoiler!) dies in it, I guess it’s not ‘serious’ enough to be a drama, or fluffy enough to be a comedy.

Toy Story 4 won for the Animated Feature category: it was a great finale to a long running saga, all of which were fine films at the top of Pixar’s game. Taming your Dragon 3 could have won in another year — which would have been a great coup for Dreamworks — but no matter how pretty the dragon films were, they didn’t have the engaging depth or heart that Toy Story provided over the years.

Notice Frozen 2, surprisingly, didn’t even get a nod, which has me floored. I thought it was better than the original, personally, and people lost their minds over that one. Nor the rebooted Lion King, which was technically animated (they are calling it photorealistic CGI — do the Oscars need a new category?). Sorry, Disney. Pixar is actually owned by Disney now, but the Pixar films are as much their own thing as Marvel and Star Wars.

Speaking of Star Wars, The Rise of Skywalker got a couple of nods in minor categories, but like Endgame, didn’t bring home a win. I kind of expected at least one Oscar, to put a nice bow on 42 years of Star Wars storytelling. Remember when The Return of the King swept the Academy with 11 wins, crediting the Lord of the Rings trilogy as a whole for bringing a difficult fantasy novel to the silver screen? This should have happened with Endgame and Rise of Skywalker. But Star Wars is so divisive now that I imagine no one wants to touch it for a while.

Can we have a science fiction category now?

Let’s hope the new Ghostbuster movie in 2020 does a bit better.

I think it’s time for the Oscars (and other award ceremonies) to provide a category for Speculative Fiction, to include Sci Fi, Fantasy, Adventure, and Superhero films. If there can be a category for Animated movies, then it’s time to branch out more. Genre movies have a hard time getting any respect! They shouldn’t be stuck with Sound, Makeup/Costumes, or Editing categories as the only way to earn a trophy.

(Last note: we missed out on adding Peetimes for The Irishman and Marriage Story because they were not wide release movies. Neither movie ever showed up at our local RunPee theaters.)

chevron_left Weekly Peeple’s Poll Results for February 10, 2020
Is there anything extra during the end credits of Sonic the Hedgehog? chevron_right