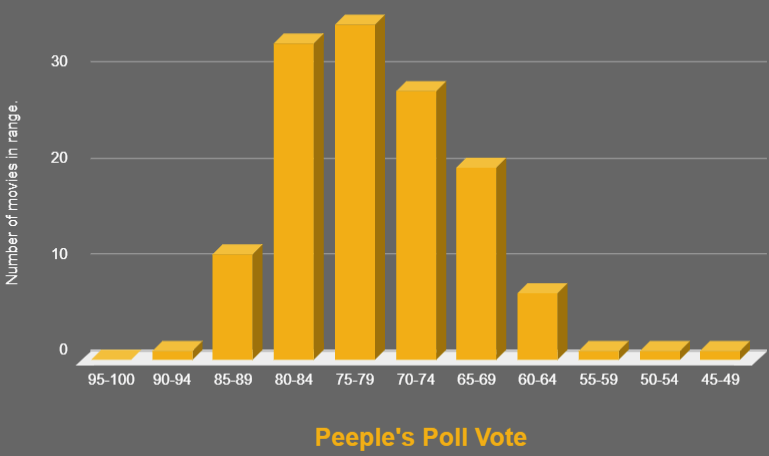 The Peeple have spoken! Avengers: Endgame was the highest rated movie of the year — by far.


Below is a breakdown of the Peeple’s Poll results for the top 30 movies in 2019. Not only did Peeple give Avengers: Endgame the highest rating of the year, they did so by a huge margin. Endgame scored 4.5 points higher than Ford v Ferrari. By comparison, you have to go 18 movies down the list to find a gap of 4.5 points below #FvF.

As you would expect, the breakdown of the post-movie rating for movies forms a nice-looking bell curve.

Here’s a few interesting data points from the Peeple’s Poll.

Do Peeple who use the RunPee app just like Marvel movies more that average? Probably not. There was a concerted effort by a few men’s groups to suppress the audience score at both sites because Brie Larson (who plays Captain Marvel) is outspoken about women’s rights. It’s impractical to rig the scoring in the Peeple’s Poll because a user can only vote once, and they must spend a Peecoin just to vote. So there’s a barrier to submitting a vote. That’s by design, because I’d rather have quality votes rather than quantity.

With that in mind, here’s a breakdown of the movies that beat expectation by double-digits this past year.

Note: Yes, I know that 9.9 is less than 10, but I loved Yesterday and wanted to include it since it was almost there.

All things considered, it’s hard to overlook just how excellent Ford vs Ferrari was. Overall it was the second highest rated movie, going by post-movie vote, but also scored 10.2 points better than expectation.

That said, Avengers: Endgame had an expectation vote that was higher  — by far — than any other movie had post-movie vote. It’s kind of hard to improve on such grand expectations, yet it did.

Of course, a lot of movies didn’t meet expectations. Here’s the complete list:

Thanks to everyone who voted in the Peeple’s Poll this year. And please let me know if you can think of ways to improve our voting system. We read every email and comment our fans send us.

What are your favorite and worst films of 2019? Comment below!