While other websites/apps offer a simple movie rating number based on user input here at RunPee we go a step beyond… And then some.

First, we offer users an option to submit their pre-movie expectation rating. This gives users some idea if a movie is better, or worse, than people expected, and by how much. A nice added bonus. 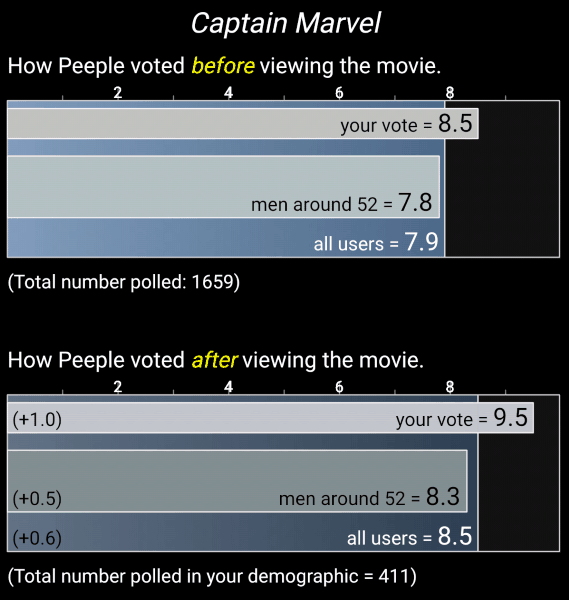 However, the piece of data we offer that is truly unique is the demographic results. For any user to submit a movie rating they must provide their birthdate and gender. This allows us to provide users a subset of user ratings related specifically to them.

For instance, a movie might have an overall user rating of 8.5. That’s good to know, but if you’re a 40 year old woman you are probably more interested in what other women, around your age, think of the movie. We provide that information, and no one else does.

Additionally, users can only submit their vote from the Peetimes Screen, which means they must spend a Peecoin. This helps insure that they are actually invested in seeing the movie. No other movie rating system on the Internet can do anything to ensure that users actually watched a movie. People can vote for any movie they want. This leads to groups “gaming the score” of a movie.  Which is what happened for Captain Marvel. Captain Marvel had a respectable 7.9 expectation vote and a 8.5 post-movie vote (+0.6). That’s not particularly noteworthy unless you look at Captain Marvel’s score at IMDb.com (6.9) and RottenTomatoes.com user score (49%). What’s up with that? Do Peeple who use the RunPee app just like Marvel movies more that average? Probably not. There was a concerted effort by a few men’s groups to suppress the audience score at both sites because Bree Larson (who plays Captain Marvel) is outspoken about women’s rights. It’s impractical to rig the scoring in the Peeple’s Poll because a user can only vote once, and they must spend a Peecoin just to vote. So there’s a barrier to submitting a vote. That’s by design because I’d rather have quality votes rather than quantity.