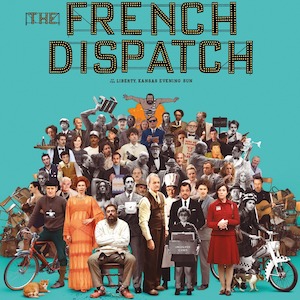 But then COVID-19 came along and buggered up everything that we thought of as normal back then. There followed somewhere between eighteen months to two years of closed cinemas and expectations being both raised, dashed, completely flattened, and then raised up a bit more. March 16th 2020 saw me going to see My Spy with tickets booked for Military Wives and No Time To Die — but March 17th saw the cinemas closed.


The 24th of August saw the doors opening again, and between then and 24th September I saw The Last Bus, Tenet (twice), Trolls World Tour, The New Mutants, Hope Gap, Les Miserables, 100% Wolf, Bill & Ted Face The Music, and The Eight Hundred.

25th September saw lockdown come back with a vengeance.

Don’t Cry In My Office

Then The French Dispatch finally came out. I booked tickets for the first showing; 10:50 on 22nd October. Half-past ten and I was just about to leave the house when the phone rings… there are technical problems and the showing has had to be canceled. As Edmund Blackadder might say, “The path of my life is strewn with cowpats from the Devil’s own satanic herd.” Various family commitments meant that I could not get to see it until yesterday so I think it’s fair to say I was quite looking forward to it. The fact that the Peetimes were already done was a bonus: thanks Vera!

Incidentally, I know this may sound like sacrilege, but when there’s a Peetime available I always set the timer but never seem to need to use it. Just having it there counting down for me seems to calm me down enough that I don’t need to go. It’s the uncertainty of wondering how much longer I need to wait that I find much more unsettling.

Anyway, I finally got to see The French Dispatch and I thoroughly enjoyed it.

I’d say it was in my top three Wes Anderson films, up there with The Grand Budapest Hotel and Isle Of Dogs… oh, and The Life Aquatic With Steve Zissou. Top four then.

Having established I like The French Dispatch and, also, that I like Wes Anderson, is it just a question of more of the same? Well, being honest, yes and no. On the yes side there is the same virtual repertory company of talent: Bob Balaban, Willem Dafoe, Bill Murray, Owen Wilson, et al plus a few new faces… Benecio Del Toro, Timothée Chalamet, and Elisabeth Moss all make their Andersonian debuts. There are famous faces, and voices, throughout.

There is also the humour. I don’t giggle and snigger throughout, but dotted through the proceedings something will be said or done and I would just bark with laughter. Remember, I’m British and we tend not to make a lot of fuss.

One big difference with The French Dispatch is the structure. It centers around the French regional office of an American newspaper, where they are putting together the final edition and deciding which articles to include. As a result, we have a film anthology consisting of four stories bound together with the editorial goings-on in the little town of Ennui-sur-Blasé.

In brief, the stories include a cycling travelogue, an artistic inmate, a student revolt, and a kidnapping foiled by a brave chef and a strongman. Each story is complete in and of itself and only linked to the others by being included in the final issue. Dotted throughout the action are snippets of animation. I don’t know if these were put in because it was easier to draw the goings-on rather than try and film them, but they were entertaining. No surprise to anyone who’s seen Isle Of Dogs!