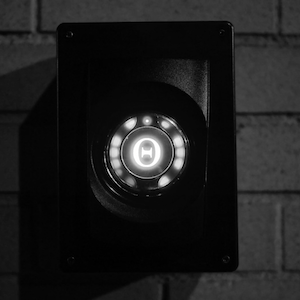 I have to admit that I was left quite confused by Tes Yeux Mourants a.k.a. That Cold Dead Look In Your Eyes. For a start there’s the name; it’s listed by the French version first on IMDb but the actual title card shows the English version as the main one with the French version as a subtitle. Then there was the way the film was sold in the blurb that came with the link. To quote the production company… “Following the success of Death Drop Gorgeous, DARK STAR PICTURES have another wildly fun LGBTQ Horror coming up – THAT COLD DEAD LOOK IN YOUR EYES.” Having watched Death Drop Gorgeous a few weeks ago I’m in a position to compare them and, quite frankly, they don’t compare well. There’s less LGBTQ content, less horror, but more humour.

Tes Yeux Mourants/That Cold Dead Look In Your Eyes is virtually all in French despite being set in New York; I’m not sure, but I would have been surprised if I spent time in Manhattan and everybody I met restaurant staff, customers, street people, etc. all spoke fluent French. Another thing that confused me was the fragmented timeline. We open with Leonard (Franck Raharinosy) and Marie (Nora Arnezeder) moving into and decorating a flat in Greenwich Village. The decorating takes the form of hanging loads of photographs taken by Marie’s father Dennis (Alan Ceppos). Then we have the opening credits followed by a flashing light on a wall and then to an outside shot of a restaurant in the East Village, Monomono… they didn’t actually hide the name board outside. It turns out that Leonard is the world’s worst cook. That wouldn’t be a problem except for the fact that he’s a chef in the aforementioned restaurant. So, after Leonard is repeatedly berated by the other restaurant staff we find that he is hiding a spectacularly badly dressed stab wound.


Your Place Or Mine?

He goes home with some fish for Marie. Sadly it was cooked by Leonard so it’s practically inedible. Whether or not it is his professional ineptitude that’s caused the friction but it’s clear that Leonard and Marie are no longer an item as he’s now sleeping on the couch following an affair; she wants him gone but, as a flat at the address they’re living in sells for about $1.5 million or is about $5,000 pcm to rent, there are financial considerations that need, well, considering. Marie has to go away on a business trip but Leonard doesn’t get any peace and quiet as her father turns up with a string of men who he takes as lovers and/or models. And it’s not just at home and at work where Leonard’s problems lie. As well as getting grief from the staff and clientele Leonard seems to keep bumping into a variety of people who want money, his bike, or to know why he hasn’t been returning calls. Incidentally, most of the street people Leonard meets have quite a variety of facial scarring and that’s before the zombie/milky eye and scabs thing starts.

Strap On Your Tin Foil Hat…

Oh… and there’s the Theta thing which I think is a dig either at the introduction of 5G or the people who think it’ll be a bigger threat than 4G or 3G was. There are small boxes stuck to walls that have flashing lights and a theta symbol (Θ) on them which, apparently, give lightning-fast internet but may cause hallucinations. So… Tes Yeux Mourants/That Cold Dead Look In Your Eyes was mainly in French, mainly in black and white, and managed to be a bit disjointed but still, somehow, engrossing. It reminded me of the sixties when I was hurtling towards adolescence and fascinated by black and white French films usually starring Jeanne Moreau. I wasn’t always sure what was happening but there was something that kept me coming back for more: style, story, atmosphere, sultry French actors, it’s hard to say exactly what it was but it kept me going until the seventies arrived bringing colour and Gérard Depardieu.