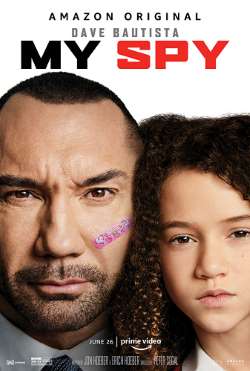 My Spy was made to appeal to kids, but it has enough adult humor to keep adults engaged, or at least awake.

There was actually a decent amount of humor and some genuine laugh out loud moments. My biggest gripe of the movie is that the action at the end didn’t live up to the buildup. It kind of feels like the writers (the brothers Erich and Jon Hoeber) couldn’t be bothered to polish the ending. That’s a real shame because they’ve written some genuinely good movies: RED, RED 2, Battleship, and The Meg. I’m not saying they’re going to take home any awards for those movies, but they didn’t lack for entertainment. Especially the RED duo.

It felt like the story built a lot of potential for the ending and then just dropped the ball. With a better ending this movie would be in the solid “B” range.


The movie earns it’s PG-13 rating because of language. The violence is really tame. There’s no blood and no on screen deaths.

I’m not entirely sure the message this movie gives to children is necessarily one parents will be thrilled with. Sophie, the little girl, uses blackmail and tricks to get what she wants. But at the same time she’s resourceful and confident. So it’s a mixed bag.

About The Peetimes: I found two good Peetimes. One early in the movie and a better recommended Peetime around the 1 hour mark.

There are extra scenes during, or after, the end credits of My Spy. (What we mean by Anything Extra.)

Is there anything extra during the end credits of My Spy?

chevron_left First View Movie Review – Matilda (1996)
Is there anything extra during the end credits of My Spy? chevron_right