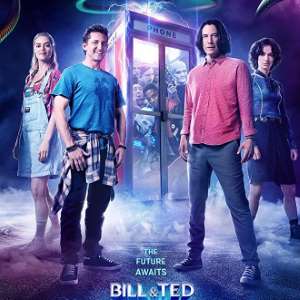 The trilogy finale (one we never actually asked for) in Bill & Ted Face the Music is a worthy follow up to the wacky 80s and 90s time traveling com-fantasies, giving us two slacker characters we grew to love over the years. This also started a life’s path for actor Keanu Reeves, who proved he wasn’t as dumb as he seemed.

Face the Music lives up to the silliness established by Excellent Adventure and Bogus Journey, being a smorgasbord of characters and plot themes laid out decades ago — and succeeding in both honoring their reign, and surpassing their expectations. Face the Music ends right. And Bill & Ted were still Bill & Ted.


I’ll be the first to admit their solution to finding the song to create utopia is a bit of a let down. It’s not the We Are the World premise that fails, though. I liked the idea of [redacted for spoilers] and realizing [also redacted!]. It’s the execution of the big song where it all falls down: it sounded like a cat in heat.

Pastiche can win. This didn’t get there — but they could have

If only the song at the end of Face the Music managed the feat they shot for: imagine a mind-blowing event where all the musical greats recreated by actors from the past, and game celebrities cameoing from our now (and come on, if asked, at least 20 celebrated musicians would have jumped at the chance to cameo — Elton John, for one, would probably be onboard, after his game turn in The Kings Men!) came together with a better score. (Think about it, We Are the World isn’t that great a song on its own: it was who showed up that made us cry.)

They had Louis Armstrong, Jimi Hendrix, and even Mozart to create a compelling melody. I’m not going to dock Face the Music for not being better than Excellent Adventure or Bogus Journey, although I think the production team should have worked as much on the ending as they did with the rest of the journey.

As it was, the cacophony at the end is dubious as the way to unite mankind. And it did bring down what could have been a triumph. We should have been crying during said song. It’s really not hard to make audiences cry.

I realize We Are the World might be going over younger folks’ heads. For those of us growing up with Bill & Ted, the song really meant something. (Also, Do They Know It’s Christmas, which reads a little dated in 2020, but still brings tears to the eyes.)

Billie and Thea, daughters of our heroes

I LOVED the daughters of Ted Theodore Logan and William S. Preston, esquire. They deserve special notice. Billie (an adorkable Brigette Lundy-Paine) especially had the physical and verbal language to be a female version of young Ted. She was Most Excellent. Both actresses went all in. Kudos to the kiddos, who should have gotten more screen time.

The princesses, on the other hand, were just there. Not even the new actresses (including the one from Glee) could add much. But at least they were reprised at all. Yay? For continuity.

Who is Rufus again? There are a lot of details I simply forgot. Why does the daughter of Rufus count, and where the heck did the Great Leader come from? What was the robot supposed to do? Was he really Rufus’ daughter’s revived [damn, redacted again]? This isn’t explained. Dennis The Evil Robot has some good stuff, but he ultimately fades away.

Was Face the Music any good?

It’s a LOT of fun. It feels right, if scattered and a bit rushed. Alex and Keanu really brought back everything I remembered about Bill & Ted. And they look great. Alex didn’t age at all, and you can’t tell Keanu is basically slumming it after moving on to such acclaimed series as The Matrix and John Wick. He’s right back in there as the gently but affectionately bemused Ted.

I think bringing this saga down is the need for fans to re-see this entire multi-decade trilogy at once. I only barely remember who the characters are or what the full story is about, even though they brought everyone mostly back. And this is a very big cast, even if a lot of them are the same characters playing themselves in different timelines. It’s not difficult to keep track if you’re sober. For everyone else, you might need to watch this a second time, and proactively rewatch the originals from the 80s and 90s.

But while this isn’t the intellectual kind of temporal excursion like Primer or Inception, they play the time jumps fairly. I talked a bit about the Phone Booth Time Travel mechanics in my review for Bogus Journey.

It’s just that you might forget the premise of the thing. There are princesses married to these doofuses? And then, there’s Missy, marrying everyone incestuously — what? Why is this funny? I don’t even remember Missy.

I remember Death, which helps.

Do you actually recall Rufus? There’s your litmus test.

How to rate the revival, and finale of a four decade trilogy?

I’m going to rewatch all three next and make one super-excellent-mega review. It’s possible that seeing these all together makes the finale really come alive. In the meantime, because they seemed to try really hard and call back everything bodacious and most non-heinous from before, I will temporarily give this a B.

In the meantime, be excellent to each other.

Updated Movie Grade: B+ (After rewatching the three films in order, I had to upgrade the trilogy capper. As expected. )