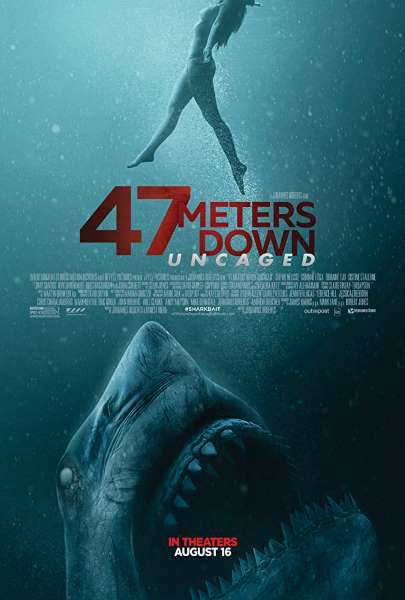 I watched a lot of shark movies recently to get excited for 47 Meters Down 2. Almost all of them were a good time. Plus, I really liked the original 47 Meters Down. But this sequel is dreadful.

I can’t even begin to tell you just how bad this movie is.

Basically, the undersea premise could have been a grand adventure — an Indiana Jones type film with blind albino cave sharks, patrolling an ancient submerged city, full of secrets and buried treasure.


Instead, 47 Meters Down 2 is  just dumb. Boring. Mindless and stupefying. It’s frequently so dark and murky underwater that it’s hard to see the action. The main redeeming feature: it was short. Why did this movie happen? Who thought this was a good idea? WHY WHY WHY WTF…arg.

Yeah. I think it’s the worst flick I’ve seen in years. (And I watch a lot of movies for RunPee.) 47 Meters Down: Uncaged doesn’t even rate a “so bad it’s good” epithet. It’s not that clever. (Here’s how to do a good ‘bad’ shark movie.)

I’ll make an effort to review this rotten film in more detail later (maybe), but with any luck it won’t matter, since you won’t see it anyway.

In an effort to add more information to this review, I’ll add that there’s zero relationship with the original 47 Meters premise or characters.  47 2 is a meager attempt to launch a shark film franchise out of too little meat. The undersea city concept could have been so cool. What a shame.

The producers should have just named the film Fish Bait and swam far, far away…

About The Peetimes: This is a short movie with a lot of action. I have 1 good Peetimes early on, and 1 good for Emergencies later. Since there’s nothing during the credits, you can run out as soon as the credits roll.

There are no extra scenes during, or after, the end credits of 47 Meters Down: Uncaged. (What we mean by Anything Extra.)

Pro-Tip — SEE ANY OF THESE SHARK MOVIES INSTEAD: