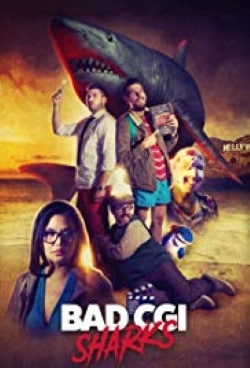 The lead shark looks better than anything in Jaws 2, actually.

RunPee was fortunate enough to secure a screener movie to review during our infamous, annual Shark Binge (which consists of just me, but I do this every year in the summer until even I get sharked out.)

Bad CGI Sharks is a strange beast (pun incidental). In spite of the “bad” name, the production values are solid, the on-location settings work, and the acting is frequently amusing. Even “Diane” — the main shark (when she’s not blitzing out in the computer lab) — looks pretty good, as she serenely swims through the air in the city. Diane’s CGI was far, far above the likes of Jaws 2, which I’m fairly sure had a bigger budget.

It’s Shark Diane’s cracked-out hench-sharks that lends the title its name. These sharks are cartoon-ish, meant as comic relief. I don’t understand their point, though, since they aren’t either funny or remotely menacing. I must have  missed something, so I passed this screener on to RunPee Sis — who’s RunPee’s resident Scream Queen — for her expert opinion.

Okay, I’ll try again. Um. Sharks swim through the air in a city and attack people in their bedrooms. Often in their underwear. That’s all fun.

What I didn’t get is why the climax had to be on the beach. Granted, not even the main guys knew why they HAD to hit the beach, so I guess that’s just baked into the plot. Sharks have to be on beaches, right? Maybe the sharks themselves felt they needed to return to the sea in some obscure way, even though they knew they were digital.

Oh, and right. Yes, they knew they weren’t real. They were self-aware AI CGI sharks, created by the characters for the screenplay “SHARKS OUTTA WATER” the (twin?) boys were writing.

And their creations came alive.

A freaky deaky Frankenstein’s shark allegory is what we have here.

I wish it was just funnier. The trailer is GREAT, but it contains all the jokes that work. I hate when that happens. The trailer is hysterical, but better than the movie.

If you do nothing else here, watch this ingenuously funny 2 minute trailer:

There are the two brothers Jason and Mathew (using their actors’ own names) who are as different as can be, but get along sometimes: long enough to infrequently collaborate on their shark movie. And then get together long enough to realize their screenplay sharks ARE OUT THERE, eating people.

My favorite character was the computer tech, from whom Shark Diane demanded all kinds of weird upgrades. Said tech doesn’t have much to do, but when she starts corpsing (losing character) on the phone to the boys, I crack the hell up.

I mean, her character was supposed to be rattled and scared — the mean old air shark is right there in her office, ready to eat her — but it’s fine if the actress just lost it anyway, and that bit was left in in the script for fun.

It’s the best moment. Her lines are too ridiculous to not start a sort of crazed gurgling: “The digital shark has become self aware! How come the shark is aware?” <—–something like that. I giggled too. That was pretty fresh. 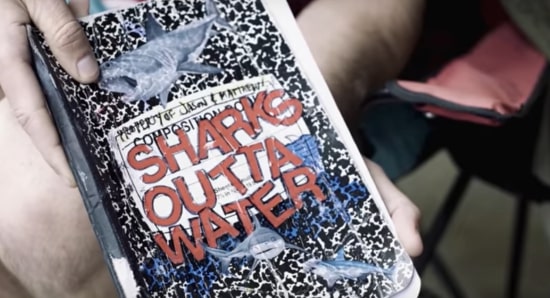 The Meta-film within the film is contained in this highly technical notebook.

Oh, and then there’s the ‘narrator’, played by Matteo Molinari as Bernardo. Or was he a kind of lunatic Greek Chorus? Meta-wise, he could have been the Script Editor. Whatever Bernardo was, his over the top antics were intentionally weirder than weird, and ironically made the film work better than expected.

Bernardo also gives us an entertaining Intermission segment, but don’t use that as a Peetime. It’s ludicrous, but in the good way. Me likee.

I can’t decide whether Bad CGI Sharks fulfills its niche. Or what the niche really is. Is this comedy, horror, or film camp? I’m going with the latter — a straight up camp parody. And until I hear from RunPee Sis to back this up or not, I’m going to stick with “Intentionally Terrible”. On that basis, let’s say this is a proper C film, with a + tacked on for some great moments of wacky goodness.

Probably best seen stoned. Or if you appreciate amazingly awful flicks as an art form in itself.