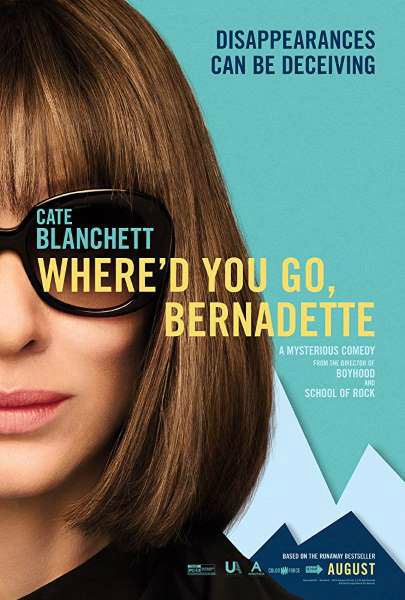 This is a crazy hard movie to give a rating to. I enjoyed it, but didn’t love it. I was engaged with the story from beginning to end, but wasn’t moved by the resolution.

The characters were well defined and the actors did a great job — every one of them. Obviously, Cate Blanchett is amazing as always, but a shout out has to be given to Kristen Wiig for her nuanced performance of Audrey. And Emma Nelson, the young girl who played Bee, shows great promise.

My problem with the movie lies in the character of Bernadette; namely that she was projected as an elite architect. The problems Bernadette faces aren’t unique, and aren’t limited to only the most talented individuals in the world.


By presenting her and her husband as highly accomplished, former prep-school-attending, wealthy individuals makes it hard for the audience to relate. She could have just as easily been presented an average architect. It isn’t about the talent — it’s about the drive to create: two things that are independent of each other.

In my college days I was an avid, but average, basketball player. I could have earned a master’s degree in physics had I traded in my gym time for lab time. But I loved basketball, and can confidently say I got as much enjoyment and self fulfillment out of playing as any elite basketball player.

An interesting choice the creators took is in giving us Bernadette’s backstory via documentary format. Exposition about a character’s past can be difficult to handle. If it’s too subtle, viewers might miss clues and become lost, wondering why a character is acting in such-and-such a manner. If it’s too obvious, it becomes heavy-handed and feels like a cheat. The documentary was creatively integrated into the story, and split up organically into two separate viewings. Kudos to the writers.

Perhaps this motivated the writers’ choice to create Bernadette as an elite architect, worthy of a documentary, so they could use this form of exposition. Personally, I’d say their choice wasn’t worth making Bernadette unrelatable, but that’s only my opinion.

Maybe I’m the only one who cares about these things. You tell me. Do you think the story would have been better if Bernadette were more relatable?

About The Peetimes: I would recommend the 2nd Peetime. It takes place in the middle of some serious stuff, but during the Peetime nothing much happens. The first Peetime is okay, but not as good as the 2nd.

There are extra scenes during, or after, the end credits of Where’d You Go, Bernadette. (What we mean by Anything Extra.)