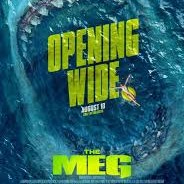 I’m mulling over The Meg. It was a ton (er, rather, several tons) of fun, but after having viewed the original Jaws this week, my expectations are a bit high. I also have high expectations for movies with dinosaurs and other ‘real’ animals (as opposed to ‘monsters’).

Megalodon was a real shark, and an ancient one, and it’s not totally inconceivable that there could be a thermal inversion layer under the Marianas Trench with a “lost world” of prehistoric creatures roaming around. It’s been said we know more about the moon than what’s deep in our own oceans.

In fact, the brief dive under the Thermocline is the best, most beautiful, and stirring part of the movie. It wasn’t goofy, like many later scenes; in fact, it was almost like seeing Pandora, from Avatar. It was a magical glimpse of a place I would have happily watched through an entire movie. That early part, with the submersible rescue, is the best act of the film, laden with all the adventure, heroism, action, suspense, and scares I hoped for.


I loved the top of the line undersea rig too: it had a spiffy science-fiction feel. More of that would have been welcome too: like a space station, or moments of life on an underwater planet. So there was some wonderful stuff to play with, had the story chosen such routes.

Once the Megalodon follows our heroes to the colder, more modern ocean, everything got a bit more staid…and eventually silly. I didn’t mind if the entire film was comedic — honestly, I didn’t know what to expect from this one, whether straight up horror or camp — but I got mental whiplash from trying to follow what genre The Meg wanted to settle on.

Were any of the characters good? Um. Hmmmm. Jason Statham did about as well as any actor leading an adventure genre, but with less of the grace and humor I would expect from Vin Diesel or The Rock. He had the in-joke name of Jonas, but his is the only name I recall out of any of the other characters. The little girl was a good child actor, but I can’t say anyone else even tried.

The scariest scene for me: when the Meg starts to SWALLOW the plastic canister. I’m not going to say more about this, in case you haven’t seen the film yet, but that had me pretty gripped/grossed out.

And then there’s the amazing early moment when the Meg bites the sea station. This shark is fast, mean, and incredibly ungainly. Ugly and vicious.

But still, the movie is no adrenaline  joyride. By the time The Meg ended I was kind of tired, instead of happy, or jazzed, or excited. After the disappointment of Jurassic World: Fallen Kingdom, I didn’t really know what to feel. I wanted wondrousness, and to be moved — or at least feel my pulse pound — and saw a couple glimpses of what could have been. I’ll stick with a B- for now, but I’ll think on it. It might not be worth more than a C+.

However, maybe it’s best to not think on this movie at all, and let it be lightly fun, instead of grand or thoughtful. There’s always the original Jaws for the best of this kind of summer blockbuster fare.

About the Peetimes: We have 3 good Peetimes. Each has pros and cons, but I’d recommend the 1st over the others. There’s no action until after the Peetime ends.

Why Avatar Was Such a Good Idea

Best Scenes From Jaws and Why They Work

Things You Didn’t Know About Jaws/Things Wrong with Jaws