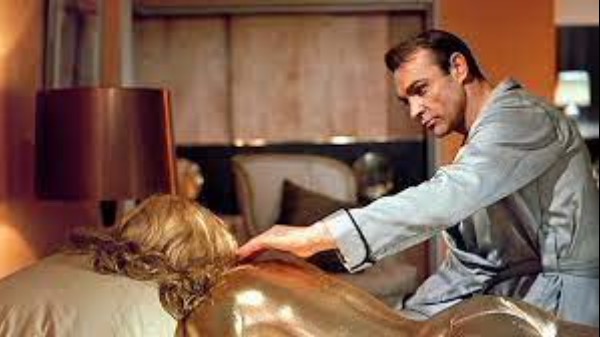 Jill, Rob, and I are reviewing the entire James Bond series in celebration and anticipation of Daniel Craig’s final Bond outing No Time to Die.  When Jill, Rob, and I did a draft to divide up the Bond reviews, this movie was my first choice.  I picked last and was surprised it was still available.  For most of my life, Goldfinger was widely considered the best Bond film.  Of course, this was before Skyfall (Rob’s first pick).

Goldfinger as a villain

Goldfinger (Gert Frobe) is one of the most dastardly villains in the whole series.  Like the monster in a good horror movie, the audience slowly becomes aware of what Goldfinger is actually capable of.  I like to think of this as the John Wick effect.  A character who initially seems like no threat reveals their power more and more as the movie goes on.

Oddjob (Harold Sakata), Goldfinger’s employee, is the first truly memorable henchman in the series.  He’s cold, cool, and efficient.  He’s strong, deadly, and seems almost unbeatable.  Plus, he has that amazing hat that can slice through stone.  He has a great fight scene with Bond at the end of the movie.

Goldfinger is iconic.  It features the famous image of the girl painted gold.  It also includes the infamous scene with Bond and the laser, and has one of the best lines of dialogue in the entire series (“No, Mr. Bond.  I expect you to die.”)

Goldfinger has one of the best opening theme songs, sung by Shirley Bassey.  She is the only artist to record more than one Bond song.  This is the first time the title song is sung over the opening credits.

It’s the first film in which Q plays a significant role and gets to outfit 007 with a range of gadgets.  And one of those gadgets is Bond’s famous Aston Martin.  This marks its first appearance in the series.  The movie also includes arguably the best-known Bond Girl: Pussy Galore (Honor Blackman).

What ages the movie Goldfinger

It is worth noting that James Bond is not a feminist icon by any means.  Whether he’s slapping Dink on the ass or forcing himself on Ms. Galore, his behavior towards women is terrible.  While we all know Bond drinks, gambles, and always gets the girl, it was surprising to me how poorly his interactions with women have aged.  While some of the technology in the movie looks dated, what really ages the film is Bond’s sexism.  The women are literally disposable and soon forgotten.

Connection to previous films:  Bond says to Felix, “They got a lot closer to you in Jamaica, didn’t they?” referencing events in Dr. No.  This time it’s Miss Moneypenny who tosses Bond’s hat onto the hat rack, a trick he showed off in From Russia With Love.

I’m watching all of the films in order.  Out of the first four Connery outings, this is by far my favorite.  It created a template for the rest of the films in the series. It’s a shame that none of these villains appear in any other Bond films (until Spectre).

chevron_left Children’s Book Review – The Mouse and the Motorcycle (1965, by Beverly Cleary)
Jump directly to Timer feature in the RunPee app chevron_right