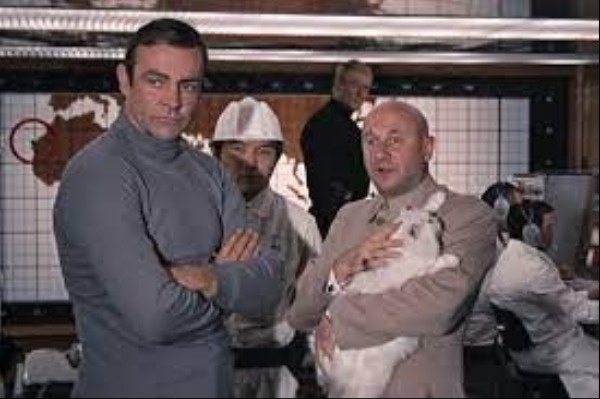 The fifth entry in the Bond series is an unexpected surprise. For me, this is the sleeper hit of the series so far. It’s a movie you never hear people talk about it, yet it’s a lot of fun. This was a lot more entertaining to me than Thunderball. Bond goes to Japan this time to get to the bottom of disappearing spacecraft. The conflict is threatening to start a war between America and Russia. I was surprised to find children’s author Roald Dahl (Charlie and the Chocolate Factory) wrote the screenplay. It differs greatly from the book. The action scenes are a huge step up from Thunderball too, including ninjas, an air battle, a car chase with a fun twist, and a volcano hideout.

Plot (Spoilers)
During the height of the Cold War, the United States and the Soviet Union lose one spacecraft each after they are both seemingly swallowed whole by a second unidentified spacecraft. The two superpowers are quick to blame one another for the disappearances, causing tensions to skyrocket. The United Kingdom has an alternate theory regarding the disappearances however, a theory involving Japan, and sends their number one spy, James Bond, to investigate there. With the help of the Japanese Secret Service, he uncovers a plot far more sinister than anyone could have ever imagined.

The main villain in You Only Live Twice

Blofeld (Donal Pleasance) is the main villain. This is the character’s third appearance after From Russia With Love and Thunderball. This is the first time we see Blofeld’s appearance. Before, we have only been able to see the lower part of his body and his trademark white cat. This is also the first time we see Bond and Blofeld in the same room together. Blofeld is obviously the inspiration for Dr. Evil in the Austin Powers films. Blofeld, like CIA agent Leiter, is a character that is recast for every film. (I’m looking forward to seeing Telly Savalas play the role.) Unfortunately, there still isn’t a henchman as interesting as Oddjob from Goldfinger. Instead of killer sharks, the villain’s weapon of choice this time is deadly piranhas.

Gadgets in You Only Live Twice

Q meets Bond in the field again when Bond requests Little Nellie. This turns out to be a small helicopter outfitted with machine guns, explosives, rocket launchers, heat-seeking missiles, flame guns, smoke ejectors, and aerial mines. Q also gives Bond a helmet with a camera on it. Disappointingly, there is no witty dialogue this time, as Q warns Bond he doesn’t want any of his wisecracks. Later, there are small rockets hidden inside cigarettes.


You Only Live Twice statistics

Opening stunt: An American space capsule is swallowed by an unknown spacecraft. One of Bond’s many lovers sets him up and he is SPOILER ALERT shot to death in bed.

Bond girls: Aki (Akiko Wakabayashi), Helga Brandt (Karin Dor), and Kissy Suzuki (Mie Hama). Women continue to be disposable in the Bond films. While Bond seems to have genuine affection for Aki (just as he did for Jill Masterson in Goldfinger), he doesn’t mourn for her very long.

Title theme sung by: Nancy Sinatra. The song has a pleasant easy-listening quality and is a vast improvement over Tom Jones’s “Thunderball.”

Connection to previous films: Blofeld, the head of S.P.E.C.T.R.E., who appeared previously in From Russia With Love and Thunderball, takes the spotlight as the villainous mastermind in this one.

Final thoughts on You Only Live Twice

If you can get past the fetishization of Asian women and the cringe-worthy concept of “turning Bond Japanese,” this is one of the more enjoyable Bond outings. Along with Goldfinger, this sets the standard by which I will judge all other Bond flicks. It’s fun, surprising, and has a strong villain.

About The Peetimes: We have a good Peetime at around the halfway point.

There are no extra scenes during, or after, the end credits of You Only Live Twice. (What we mean by Anything Extra.)

chevron_left Is there anything extra during the end credits of Spirit Untamed?
The Giant James Bond Rewatch – Dr. No (1962) chevron_right