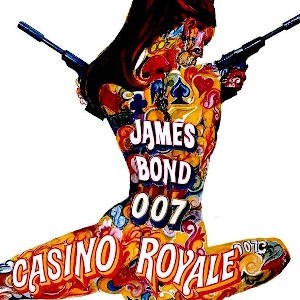 I’ll be honest –when the plan to do a complete rewatch of all the 007 films in time for the much delayed release of No Time To Die and the list was limited to the ‘official’ Eon productions, I was feeling a little wilful when I asked about the missing ‘unofficial’ films; 1967’s Casino Royale and 1983’s Never Say Never Again.


But then I started thinking and I vaguely remembered watching both of those films some years ago. My memory of Casino Royale was that it was all a bit silly and very dated, but I have to admit I was probably about twelve when I saw it. So this exercise was a chance to learn a bit more about it and give it another watch.

There is plenty of anecdotal evidence of the cast thinking Casino Royale was going to be a straight up spy film rather than a spoof/pastiche/parody. Peter Sellers, allegedly, kept rewriting his scenes to make them play less comedically. I find it hard to fully accept, because the pre titles scene, which is shown in the trailer, has Evelyn Tremble/James Bond (Sellers) and Inspector Mathis (Duncan ) meeting in an old fashioned French street pissoir; the way Bond checks out Mathis’ credentials can’t be anything other than a sight gag.

So many camoes and bit parts…

One of the things I got from a viewing of Casino Royale at a later stage of life: now I can see the sheer number of cameos and bit parts played by British actors and performers who were household faces, if not names, when I was growing up.

In a time when a lot of people complain that the whole story is given away in the trailer, I wonder what they’d make of big stars who’s whole role is shown in the trailer/opening titles?

Excuse Me. Are You Richard Burton?

“No, I’m Peter O’Toole!” O’Toole answers. “Then you’re the finest man that ever breathed.”

He was, allegedly, paid a case of champagne for reciting those two sentences and engaging in a little, light sporran fondling. Milton Reid played his usual strong silent role. Anjelica Huston was a hand double for Deborah Kerr. Ian Hendry’s role was cut and he only appears as a corpse. David McCallum was deep in his role as Illya Kuryakin in The Man From U.N.C.L.E. and he doesn’t actually say a word; he just listens to George Raft. Stirling Moss has a two second gag appearance chasing a car… on foot. Jean-Paul Belmondo appears about ten minutes before the end and has two lines.  Jack Lemmon, Frank Sinatra, Sophia Loren, and Barbra Streisand were all mooted for similar cameos but they never came to pass.

This Means An Angry Letter To The Times

One thing that can’t be denied about Casino Royale is that, narratively speaking, it’s a mess!

The story is chopped and changed and runs through all manner of styles from German Expressionism to Hollywood Western. So is this just representative of the era? All L.S.D., Warhol, and Pop Art?

It’d be rash to deny is a possibility but that isn’t the whole story. The whole thing went wildly over budget. It started with a massive (for 1966) budget of $6 million, but it ended up costing more than double that, and resulted in amounting to more funds than the first four official Eon Production Bond films put together.

Perhaps that wasn’t helped by Peter Sellers being given a present of a white Rolls-Royce on the first day of shooting. Apparently, producer Charles Feldman was appreciative of the work he’d done on What’s New Pussycat. There is a brief reference to What’s New Pussycat in a gag, which has a manhole cover being lifted and Tom Jones can be heard belting out the theme, before they cover it back up and decide to go elsewhere.

However, Peter Sellers would soon prove himself to be a massive liability to the extent of actually getting fired before the end of shooting his scenes.

This, in part, explains the choppy editing and the, almost, total absence of Sellers from the last half of the film.

Originally, Sellers suggested Orson Welles for the part of Le Chiffre, but they fell out following a set visit from Princess Margaret. Sellers had met the princess previously and welcomed her extravagantly to the set in a “Hello my old friend” way. Unfortunately HRH was in awe of Orson and swept past Sellers, irritating him greatly to the extent that he refused to appear with Welles again. The scene of them playing Baccarat (reportedly James Bond’s favorite casino game) had to be shot over two days; Welles doing his part one day, Sellers the next.

Sellers also hated that Orson Welles insisted on doing magic tricks during the casino scenes; this can be seen in some of his reaction shots. Add to that Sellers punching Joseph McGrath, one of the directors, shooting Jacqueline Bisset in the face with a blank as she made her entrance, and insisting that a set be torn down because he’d had a dream where his mother had said she didn’t like it — and it’s amazing he’s in it as much as he is.

Sadly, he was in long enough to insist that the sublime John Bluthal was sacked before he could film all his scenes…probably, because he was getting too many laughs.

You’re Crazy. You Are Absolutely Crazy.

But Peter Sellers wasn’t the only one to get a P45.

All this mayhem had to be patched up by someone and that onerous task fell to Val Guest. He managed to stitch everything together using Sellers’ outtakes, a cardboard cutout, and camera trickery. Given all that going on it’s understandable that there are some abrupt narrative shifts.

But is it all bad? Well, frankly, no.

It’s interesting to see how Ian Fleming’s original choice for Bond, David Niven, got on with the role.

In my opinion, not too bad! Given that he convincingly plays a twenty year retired Bond in Casino Royale — which was made only five years after Dr. No — answers the ultimate suitability question. He carried off his action scenes reasonably well, and had the suaveness to have been the English Bond that Fleming wrote, before being swayed by Sean Connery’s performance and giving 007 a Scottish heritage.

But there are lots of similarities between this and the Eon Productions.

Nice cars: an E-Type Jag, a 1923 3 litre Bentley, and a Bedford milk van… maybe that’s just a British child of the sixties thing.

There were gadgets and an underground villain’s lair.

There were great Burt Bacharach tunes, like the main theme performed by Herb Alpert and the Tijuana Brass, and The Look Of Love by the much missed Dusty Springfield. For me, The Look Of Love is the best Bond song yet. Maybe that’s why those two tunes often end up on compilations of Bond themes!

There are knowing nods to previous Eon Bonds; the villain is Dr. Noah, there were girls painted gold, and the usual trip to the ‘Q’ section.

Also, Woody Allen spent so long sitting around waiting to be called that he wrote the script for the appropriately named Take The Money And Run while he was waiting. He became so fed up by the delays to his final day that, when he finally finished, he left the set still in costume and went straight to Heathrow and flew back to New York! Mind you, the chaos and mayhem he witnessed gave him the confidence to dive in and start directing his own films.

All in all, I enjoyed Casino Royale far more the second time around and nearly fifty years later than I thought I would.

About The Peetimes: The 1967 Casino Royale is famously disjointed and with choppy editing necessitated by various cast and crew sackings. This makes it easy to find good long Peetimes, but don’t worry if it looks like you’ve come back to a different film!

There are no extra scenes during, or after, the end credits of Casino Royale. (What we mean by Anything Extra)