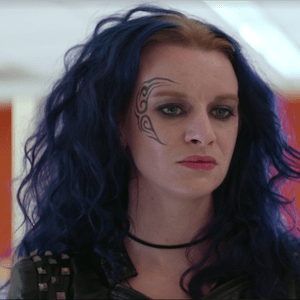 So…yet another vampire film. Whenever you think of a vampire film you automatically start thinking of garlic, holy water, stakes, and factor five hundred sunscreen. Let’s just throw it in the “horror” bin and see what comes up next. But wait a minute…Bite Me isn’t really a horror film. Other than the fact there are vampires in it, there is really nothing that actually says “horror”.


What we actually have is a slightly surreal rom-com. Each film can define its own mythology. In this one, vampires are real and living in the world with us. They aren’t affected by sunlight or crucifixes. They exist by absorbing the energy of others which is usually taken in the form of blood but they don’t bite…it’s unhygienic!

In the past, we’ve seen the vampire hordes being taken down by Professor Van Helsing. In Bite Me it is a chap called James Dayer (Christian Coulson) who works for the I.R.S.

How does the taxman get involved?

It’s all down to a reality TV programme called “Freaks In Paradise” which has five real-life freaks competing to win fifty thousand dollars.

Listen To Them. Children Of The Night. What Music They Make.

It turns out that one of the freaks is Stacz (Antino Crowley-Kamenwati) and his claim to freakishness is that he’s a real vampire. It’s not made clear how but, thanks to his appearance, James is given the file of a church and told to investigate it. Into the office walks Sarah Woods (Naomi McDougall Jones) for the initial meeting.

This, in the rom-com parlance, is the meet cute.

The church in question is the House of Twilight and, like every other church, they don’t have to pay tax on any donations or other income. Sarah comes in to see James and has to justify how her establishment counts as a church; I assume all churches have to do that, but I have no idea why some are given carte blanche to become obscenely rich.

So boring, ordinary James falls for Sarah with her blue hair and Tysonesque facial tattoo…and telling much more would be giving stuff away. I think I can give away the source of the vampirism…it is, apparently, a biological condition that manifests as an inability to create enough energy by the usual methods. Blood is the physical manifestation of energy because it flows through you, so they supplement their energy deficit by drinking the blood of donors.

I’m Going Out To Get A Bite To Drink.

What is refreshing is the complete divorce of vampirism and Christianity, which does help with an amusing denouement.

There was a bit that reminded me of the 1967 comedy-horror Dance Of The Vampires. There is a scene with Alfie Bass as the Jewish innkeeper who has been turned into a vampire. Someone comes up to him brandishing a crucifix and he says, “Oy vey, have you got the wrong vampire!” This is reflected in Bite Me by Lily (Mahira Kakkar) who is in tears after her “mundane” boyfriend has dumped her after she came out as a vampire; “He said you can’t be a Muslim vampire!”

Incidentally, going back to “mundane”: while at a vampire party Sarah explains to James that mundane is a non-vampire and James says that it sounds very similar to being a muggle.

Why is this so interesting? Well, I didn’t spot it thanks to nearly two decades having passed, but Christian Coulson played the teenage Tom Riddle/Voldemort in Harry Potter And The Chamber Of Secrets!

Indie Movie Review – My Summer As A Goth