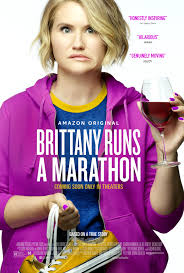 2019 was an eclectic year for movies and one I’m kind of sad to leave behind.  This year, the studios threw everything they had at the screen, from biopics to horror films, from dark comedies to three hour epics.  I know I had a good time at the movies this year because it was really damn hard to cut my list off at ten.  And it was hard to rank the ten I chose.  So before I change my mind again, here are my top ten films of 2019.


Jillian Bell has been a supporting player in comedies like 22 Jump Street for a long time.  This year, she starred in her own feature and she knocked it out of the park.  Every summer, I hope for an indie comedy that’s as good as Little Miss Sunshine.  This year, it was Brittany.  Bell makes you fall in love with her character.  It was hard choosing between this movie and The Peanut Butter Falcon as my number ten.  I ultimately had to go with the movie that made me tear up.  It’s funny, it’s inspiring, and it’s been on my mind since August.  Jillian Bell did not get an Oscar nomination for this movie, but I hope she does one day.

This Elton John biopic features a terrific cast.  It’s a shame Jamie Bell and Bryce Dallas Howard aren’t receiving more attention for their roles as John’s songwriting partner Bernie Taupin, and emotionally abusive mother, respectively.  Taron Egerton transforms into Elton John in a way I couldn’t have imagined any living actor capable of.  And he does his own singing.  Instead of running through the soundtrack like a greatest hits jukebox, the songs are used artfully and in unexpected ways throughout the film.  The music is used to service the story, rather than as fan service.  The script is excellent.  As my girlfriend pointed out, John’s costume comes apart as he becomes more vulnerable.  It’s always great to have some LGBTQ representation on-screen and this was probably the most positive and most visible example this year.

Dare I say it?  This might be my favorite Scorsese film.  It’s definitely a masterpiece.  Watching Pacino and DeNiro together is a treat, two of the greats finally starring together in a movie where they share more than one scene.  Somehow Joe Pesci walks away with the entire film.  The three hour plus running time passes quickly.  I’ve already read the synopsis for Scorsese’s next film and I’m excited for it.  But this, this was something special.

This was the sleeping dragon this year.  Before I could see it, I kept hearing couples gossiping about how good it was, while waiting for other movies to start.  When I finally took my girlfriend to see it, we were both surprised at how right they were.  This movie has a lot more humor and heart than I would have suspected.  I’m not a car guy at all, so I never thought this would end up in my top ten.  Matt Damon and Christian Bale have great chemistry.  The final race is a real nail biter.  I found myself a lot more emotionally invested in this story than I expected.  It’s a fun, thrilling, worthwhile ride.

The ending feels too sudden.  And Rebel Wilson feels wasted.  But everything else works nearly perfectly in this dark comedy.  I find myself rooting for it more and more as awards season goes on.  Director Taika Waititi tells the story of a Hitler youth whose mother is secretly protecting a Jewish girl, and he manages to make it funny.  Scarlett Johansson’s work in Marriage Story has overshadowed her role in this film, but she really shines as Jojo’s mother.  Sam Rockwell gives one of the funniest, most outrageous supporting performances of the year.  Young star Roman Griffin Davis nails a difficult role without being overly cute.  And Waititi is hilarious as a child’s ideal of Hitler.  This is a movie that, on paper, should not work at all.  But Waititi is a genius.  I shall never doubt him again.

I waited for this movie with bated breath and I was very pleased with what I got.  The Russo brothers managed to bring an eleven-year saga to a satisfying conclusion with suspense, action, laughter, and tears.  I wish Rise of Skywalker had felt as satisfying.

3. A Beautiful Day in the Neighborhood

Kindness and compassion are rarely the stars in a Hollywood movie.  So it was refreshing to see a film that speaks to our humanity and our basic human decency.  I love the way the movie is structured like an episode of Mr. Rogers’ Neighborhood for adults.  Tom Hanks embodies the gentle spirit of Fred Rogers beautifully, treating every character on screen with dignity.  This is one of those rare films that makes you want to be a better person.

Every year, there’s a movie I become obsessed with.  I have to see it at least twice to make peace with it and fully understand it.  This year, it was Us.  Jordan Peele’s sophomore effort dazzles every bit as much as Get Out.  Lupita Nyong’o is stunning in a double role.  The film has layers of meaning and symbolism you can dissect for days.  I’m so bummed this got shut out at the Oscars.  It’s a work of genius.

My number one took me by surprise.  I was not a fan of Bong Joon-ho’s previous film, Snowpiercer.  However, Parasite is a masterpiece.  This story about two families separated by class affected me more than anything else I saw this year.  The ending stayed with me longer than any other film and still makes me feel emotional right now.  The humor, the suspense, the plot twists, the characters, it’s all masterfully done.  And the cast is excellent.  I see something of my own father in the film, so the story is cathartic for me.  If you still haven’t seen this one, seek it out.

chevron_left Unfaithful Horror Movie Adaptations
Is there anything extra during the end credits of Bad Boys for Life? chevron_right